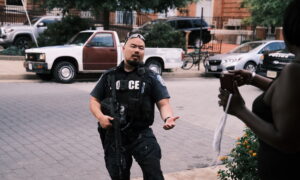 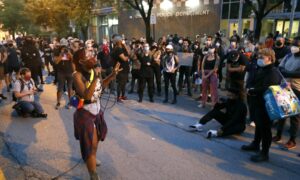 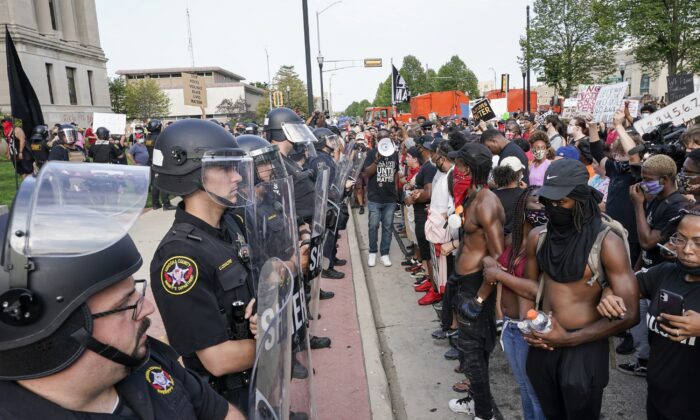 Protesters link arms in front of a police line outside the Kenosha County Courthouse in Kenosha, Wis., on Aug. 24, 2020. (Morry Gash/AP Photo)
US News

A new Marquette Law School poll shows that, between June and August, support in Wisconsin for the Black Lives Matter protests dropped sharply, while sentiment about the movement itself also noting a significant decline.

This poll, released on Aug. 26, sought to gauge public reaction in Wisconsin to the death of George Floyd in police custody and the ensuing mass protests, some of which have been marred by violence. It does not reflect any potential shifts in public sentiment following the Jacob Blake shooting and incidents in Kenosha, Wisconsin, as the data was collected prior to those events.

Unrest broke out in Kenosha on Sunday, following the shooting of Blake in confrontation with officers, who were dispatched to a residence after a woman called 911. The chaos that erupted Sunday culminated in gunshots on Tuesday night, with a 17-year-old Illinois teenager arrested and charged with homicide and attempted homicide after allegedly killing two people and wounding a third.

People living in cities or suburbs, as well as Democrats, saw the protests as largely peaceful, while those in exurbs, small towns, rural areas, and Republicans felt the protests were mostly violent.

In June, 59 percent of Wisconsin respondents said they had a favorable view of the Black Lives Matter movement. The percentage of people saying they have a positive view of the movement dropped to 49 percent in August.

A similar dynamic was observed in regards to people seeing Black Lives Matter in a negative light, with 27 percent in June saying they had an unfavorable view of the movement, while in August, 37 percent expressed this view.

Support for Black Lives Matter varied across race, geography, and party affiliation. Black or Hispanic respondents kept a strongly favorable view while the views of white respondents became much less favorable between June and August.

The percentage of big city dwellers having an unfavorable view of Black Lives Matter dropped by five percent between June and August, while all other places saw unfavorability rise by at least 10 percent, with small towns seeing the biggest surge in negative sentiment, rising from 32 percent in June to 46 percent in August.

The poll also showed that a large majority are opposed to defunding the police, with 70 percent in June and 78 percent in August expressing opposition. However, 81 percent of respondents in June and August jointly said they support “calls to restructure the role of the police and require greater accountability for police misconduct,” while just 16 percent were opposed. The poll also showed that Wisconsin respondents have highly favorable views of the police overall.

On Wednesday, Vice President Mike Pence spoke at the Republican National Convention, where he defended police and called for an end to unrest in cities where arson, looting, and violence have followed peaceful protests over police brutality.

“Under President Trump, we will always stand with those who stand on the thin blue line,” Pence said. “And we’re not going to defund the police. Not now, not ever.”

Black Lives Matter activists are holding their first Black National Convention on Friday, a virtual event that, according to a report by The Associated Press, will adopt a political agenda calling for slavery reparations, universal basic income, and legislation that entirely re-imagines criminal justice reform.