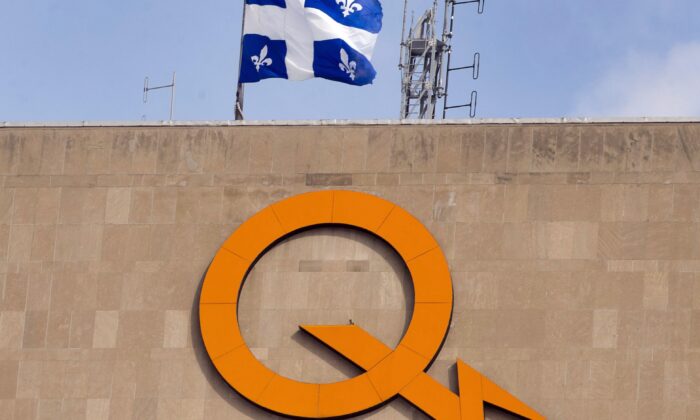 A Hydro-Quebec logo is seen on the company’s head office building in Montreal on Feb. 26, 2015. (Ryan Remiorz/The Canadian Press)
By Andrew Chen

A Montreal-based group that has appeared to give support to the alleged Chinese spy working at Hydro-Québec shows the need for a foreign influence registry, says Sen. Leo Housakos.

On Nov. 15, Yuesheng Wang made his first court appearance after being arrested by the RCMP a day earlier for allegedly sending trade secrets to China. The national police service said his alleged action was “to the detriment of Canada’s economic interests,” according to a Nov. 14 RCMP news release.

An RCMP spokesperson told The Epoch Times that the 35-year-old resident of Candiac, Quebec, a researcher, is the first person in Canada to be charged with economic espionage under the Security of Information Act.

But Housakos expressed concern about the attendance of a representative of a group called the Canada-China Friendship Promotion Association (CCFPA) at the Nov. 15 hearing, and her claim that the proceedings are likely to cause discrimination against the Chinese community in Canada, as reported by CBC News.

“We have to fight that. It is discrimination,” said Tina Zhu. “We are human beings, we are the same.”

Zhu is president of the CCFPA, “an organization whose exact workings are not known,” the senator said at a Senate meeting on Nov. 16.

An address provided on the CCFPA’s website appears to be a store unrelated to the group, located on Boulevard Monk in Montreal.

Chinese espionage at Canada’s largest power utility is yet another incident of interference by Beijing in Canada’s democracy, and is yet another example of why a foreign influence registry as called for in my Bill #S237 is so necessary. pic.twitter.com/nDMw7MvtdV

The CCFPA introduced itself at a New Year celebration event. According to a video about the event posted on YouTube, dated Jan. 9, it started out as a group under the Chinese name “Free Meng Wanzhou In Action” that was registered with the Canadian government on July 15, 2021.

That was during a time when Canada and China remained in a gridlock over Ottawa’s arrest of Meng, a senior executive of Chinese telecom giant Huawei, in response to a U.S. extradition request.

Shortly after Meng’s arrest in December 2018, China detained two Canadians—Michael Kovrig and Michael Spavor—in what is widely seen as a retaliation against Canada.

The Epoch Times reached out to the CCFPA for comment but didn’t hear back.

“[Zhu] said she does not work on behalf of the Chinese government; it is a coincidence if she is there to support Chinese agents in Canada,” Housakos told the attendees at the Senate meeting.

“This brings me to S-237, a bill that would allow us to know if this woman is indeed working for the Chinese government,” he said, referring to the Foreign Influence Registry and Accountability Act he sponsored, which underwent first reading in the Senate in February.

“This bill would apply to authoritarian countries such as China, Iran, and Russia.”

Housakos has been pushing for the legislation to be passed, which would establish a Foreign Influence Registry that aims to impose an “obligation on individuals acting on behalf of a foreign principal to file a return when they undertake specific actions with respect to public office holders.”

At the Senate meeting, the senator said that his bill, which has yet to pass second reading in the Senate since reaching that stage in March, has faced obstructions by senators appointed by Prime Minister Justin Trudeau.

His accusation was denounced by Sen. Marc Gold, who has served as the representative of the government in the Senate since January 2020.

“I’m not doing anything to block this bill here in the chamber. It should be studied properly and go through each step. And I’m ensuring that is the case with your bill as I do every other one,” Gold said.

Gold, however, declined to comment when Housakos sought his reassurance that the Liberal government will follow through to the end with Wang’s espionage proceedings and “will not conclude with a deal with the Chinese government to resolve this issue.”

“All I can say, Senator Housakos, is that the government takes the interference of any country very seriously, be it China or another. And that is for interference into our democratic institutions. We will continue to watch this matter,” Gold said.

Housakos said at the meeting that Canada is in a precarious situation, referring to the recent multiple reports of interference operations being carried out on Canadian soil by authoritarian regimes.

“Currently, Canada is in a dangerous situation, with several countries trying to influence it,” he said.

The RCMP is investigating reports about three unauthorized Chinese police service stations in Toronto, which allegedly target Chinese diaspora and dissidents living abroad as part of its “Operation Fox Hunt” and “Operation Sky Net” launched by Chinese leader Xi Jinping in 2014 and 2015 respectively. These operations are said by the Chinese regime to be part of efforts to fight corruption and criminal activities.

In addition, Trudeau said on Nov. 22 that his government is aware of reports about state actors from the Islamic Republic of Iran intimidating dissidents living in Canada.