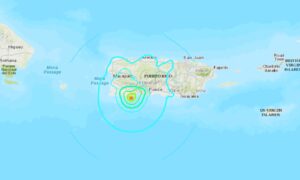 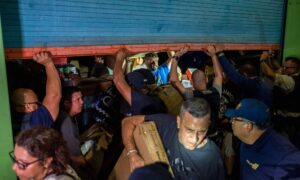 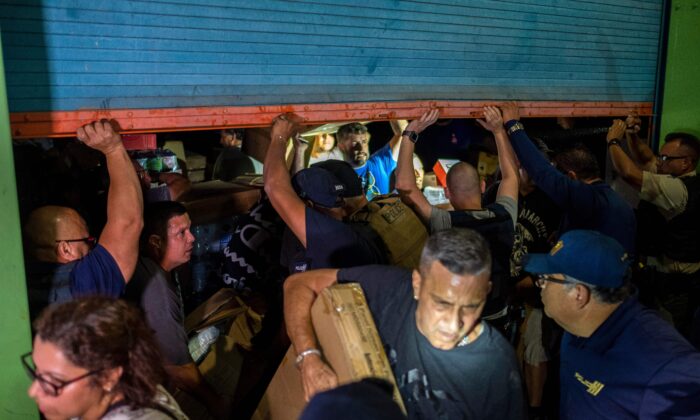 Police arrive as people break into a warehouse filled with supplies, believed to have been from when Hurricane Maria struck the island in 2017 in Ponce, Puerto Rico, on Jan. 18, 2020. (Ricardo Arduengo/AFP via Getty Images)
US News

Concerns over misuse of disaster aid resurfaced in Puerto Rico with the recent discovery of a warehouse where the island’s government kept supplies originally intended for the victims of 2017’s Hurricane Maria.

The warehouse was found in Ponce on the southern shore of the island by Lorenzo Delgado Torres, a local activist who runs a Facebook page named “El Leon Fiscalizador” with over 240,000 followers, about 50,000 of whom joined in the last several days. He said he acted on a tip. Dozens of people later stormed the warehouse to grab the supplies.

The island’s government responded by saying it was distributing the supplies from the warehouse and that there was no shortage of the items stored there.

“No citizen has been denied any of the items stored in the warehouse,” the government said in a statement.

Ponce Mayor María Meléndez, however, said she was outraged, noting that she and other mayors were trying to find basic supplies since a 6.4 magnitude quake hit in the island’s southwest on Jan. 7.

“I spent several days requesting cots and water,” she said. “They sent me to Cabo Rojo for the cots and to San Juan for the water. If I had known that those supplies were there, I would have demanded that they be taken out immediately.”

The discovery of the warehouse was the latest in a string of incidents in which supplies were seemingly found lying dormant across the island.

He said the warehouse was one of two rented by the state to keep leftover donations or aid from the relief effort after Maria, the massive storm that caused an estimated $90 billion in damage in Puerto Rico.

The Ponce warehouse was damaged by the recent earthquake, so the supplies needed to be moved out, Reyes told David Begnaud, a CBS News correspondent in Puerto Rico.

“Apparently, they were kept in secret and the governor was always told that the commodities were distributed properly and according to the contingency plan,” Reyes said. “It was a lack of information being provided to the governor.”

The government acknowledged 80 pallets of water in the Ponce warehouse that had already expired and would need to be discarded.

This isn’t a unique problem. Thousands of other expired water bottles from the Maria relief effort ended up used for irrigation.

Sonia Torres, 59, whose house in rural Adjuntas, the municipality above Ponce, was damaged by the earthquake, said cans of soup she was given after the disaster also were expired.

The earthquake killed one person and is estimated to have caused more than $200 million in damage.

Torres recently managed to pick up some supplies distributed by the government, but the most pressing concern for her and many others is housing. More than 7,000 people remain in shelters since the quake.

Cracks in the walls of her house are getting bigger, she said, and she doesn’t know if it’s safe for her to stay there. She submitted her paperwork to the government, but so far hasn’t heard back. She spent the first night in a shelter set up in a basketball court, but there was no electricity and it was very cold at night, so she now sleeps in her car.

She also needs someone to assess the damage on her house.

Electricity also remains a problem. The quake knocked out a major power station, and the rest of the grid could barely compensate, said Alex Amparo, assistant administrator of the National Preparedness Directorate at the Federal Emergency Management Agency (FEMA), in an interview with Begnaud.

For the first week, there was no power in Torres’s town, she said, resulting in all the food in her refrigerator going bad. She bought more, but the outages persisted, so she’s now hesitant to buy more perishable food.

Even today, the power is still on and off, she said.

The island’s power grid was decimated by the 2017 hurricane. A major reason was its state of disrepair even before the disaster struck. In 2016, the average Puerto Rican saw 4.5 power outages that took an average of 3 hours to fix (pdf). A 2016 study (pdf) found the “generation and transmission infrastructure literally falling apart.”

FEMA organized a major workforce for fixing the grid, with over 2,000 Army Corps of Engineers personnel working on the repairs in 2018.

Since 2017, Puerto Rico has received over $15 billion in disaster funding, with tens of billions more on the way.

President Donald Trump on Jan. 16 called Puerto Rico “one of the most corrupt places on earth” and denounced its leaders as either “incompetent or corrupt.”

On Jan. 15, the Trump administration imposed dozens of new conditions on the island’s government to access $8.3 billion in delayed recovery funds for Hurricanes Irma and Maria in 2017. A day later, Trump declared a major disaster on the island, boosting aid to Puerto Rico.

Trump’s declaration of a major disaster in Puerto Rico makes federal funding available for repairs, temporary housing, and low-cost loans “to help individuals and business owners recover from the effects of the disaster,” the White House said.

News of the apparently mishandled supplies upset many Puerto Ricans, who were already angry over the government’s botched response to Hurricane Maria, with similar incidents of supplies going unused and being uncovered months later.