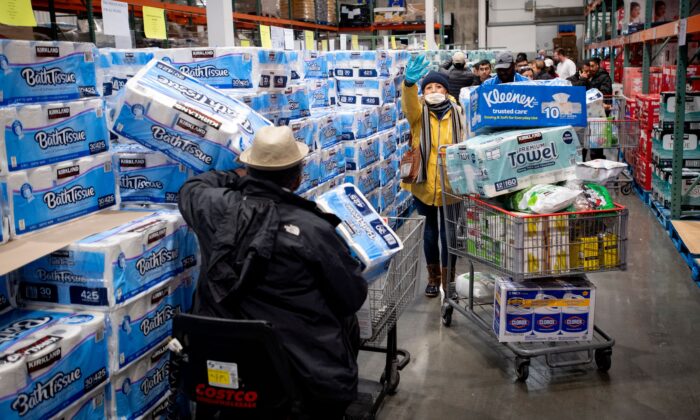 People shop for toilet paper at a Costco store in Novato, Calif., on March 14, 2020. (Josh Edelson/AFP via Getty Images)
Economy

Richard Galanti, Chief Financial Executive of Costco, told participants on an earnings call on Sept. 23 that the company was facing supply chain issues and inflationary pressures.

While Costco has responded to the supply chain crunch by ramping up purchases and ordering early with Christmas items like toys, the company is also bringing back buying limits on some products, Galanti said. These include toilet paper, bottled water, paper towels, and high-demand cleaning products, though he did not specify how many items customers would be able to purchase.

Seeking to ease some of the supply pressures, Galanti said Costco has chartered three ocean vessels and leased thousands of shipping containers for use on those ships for the next year to ramp up shipments between Asia and the United States.

Higher costs of plastics and resins have led to many items in Costco’s offering—such as trash bags, plastic cups, and pet products—to go up by between 5 to 11 percent, he said.

Galanti said Costco would bear some of those costs, but some would be passed on to consumers.

“With inflation, to the extent that there are permanent inflationary items, like freight costs, or even somewhat permanent for the next year, we can’t hold on to all those, some of that has to be passed on and it is being passed on,” he said.

Galanti also touched on the semiconductor shortage that has bedeviled the automaking industry, among others. He said the chip crunch had also impacted items in Costco’s product offering, including computers, tablets, video games, and major appliances.