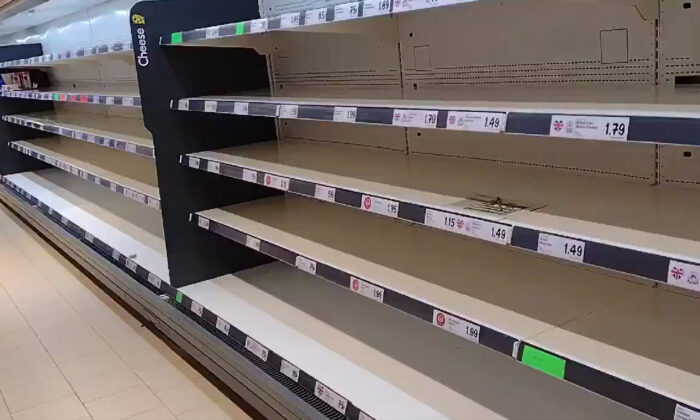 The UK is set to see a sharp slowdown in economic growth as the mounting supply chain crisis and staff shortages threaten to derail Britain’s recovery, according to a major business group.

The British Chambers of Commerce (BCC) warned there was also a “real danger” the government’s health and social care levy could further stifle the economic bounce-back from the pandemic.

It comes after the government on Tuesday announced a 1.25 percent national insurance tax hike to raise £12 billion ($16.5 billion) to help fund the NHS backlog and social care system.

The BCC slashed its forecast for third-quarter growth to 2.8 percent from 3.5 percent previously as it said the supply chain disruption and hiring difficulties are offsetting the boost from July’s full lifting of coronavirus restrictions.

It added that growth—which stood at 4.8 percent in the second quarter—is predicted to ease back further to 1.6 percent between October and December.

Official figures on Friday are expected to show a further slowdown in growth over July, with most economists pencilling in 0.5 percent expansion, down from 1 percent in June.

The supply and lorry driver woes have left supermarket shelves increasingly bare in recent weeks and are hitting sectors from hospitality to housebuilding.

The UK is still set to see the strongest growth since official records began in 1949 as a whole over 2021, with gross domestic product (GDP) set to expand by 7.1 percent, followed by growth of 5.6 percent in 2022, according to the BCC.

But it said the lorry driver shortage, global supply issues, and wider recruitment troubles are set to hamper the rebound and mean the economy will only return to its pre-pandemic level in the first quarter of 2022.

Suren Thiru, head of economics at the BCC, said the group’s latest forecast “points to a loss of momentum in the coming months as staff shortages, supply chain disruption, and rising cost pressures limit output from many sectors.”

He cautioned, “A prolonged period of acute supply and staff shortages could derail the recovery by forcing firms into a more permanent reduction in their operating capacity, eroding their ability to fulfil orders and meet customer demand.”

He added, “There is a real danger the national insurance increase announced this week could stifle the recovery. Any further tax changes could very well prolong the economic damage from Covid.”

The BCC said that despite the economic rebound, business investment is expected to decline by 2.5 percent this year, which could be the “weak point of the recovery because it undermines the UK’s ability to raise productivity and increase our long-term growth prospects.”

It also echoed recent forecasts from the Bank of England that surging inflation is set to peak at 4 percent in the fourth quarter and said interest rates are likely to start rising at the end of 2022 with a second due a year later.