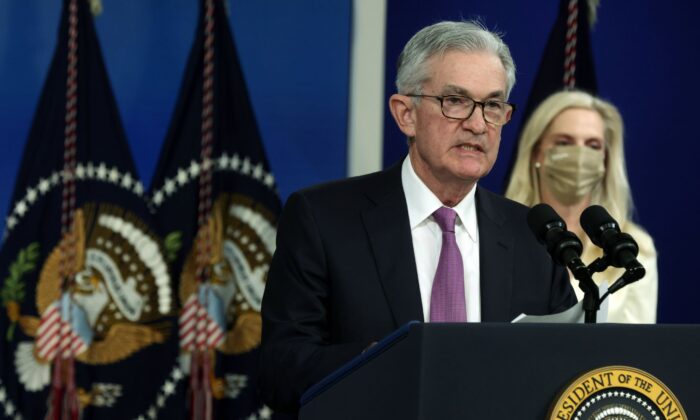 Rising inflation, labor shortages, and supply chain disruptions were acting as resistance to the growth of the U.S. economy as it entered a period of revival, according to a new Federal Reserve report released on Wednesday.

There has been an increase in consumer spending but labor and material shortages have restricted economic growth to a “modest to moderate pace” in most of the central bank’s 12 districts, from where data was collected for the Fed’s “Beige Book” report. The latest version of the report, which is published eight times per year, has collected economic data from October through November.

Effects of COVID-19’s latest variant, Omicron, have not been featured in the report.

Although there was “strong demand” and “outlook for overall activity remained positive,” some districts “noted uncertainty about when supply chain and labor supply challenges would ease.” In general, the outlook was mostly positive in the report.

There was high demand for loans with strong manufacturing growth and an increase in nonresidential real estate activities for almost all districts. Land values increased while financial conditions in agriculture improved.

Construction activity saw a revival with robust demand, but was held back due to shortages of raw materials and staff. Likewise, low inventories of some items like automobiles reflected global supply chain crunches.

Regarding inflation, price hikes have been reported to be “widespread across sectors of the economy.” There was a hike in costs of raw materials but businesses have, till now, managed to offset some of the costs because of strong demand. But, some firms interviewed for the report could not hike prices due to contractual obligations.

There was a “modest to strong” growth in employment but businesses generally found it hard to hire and retain workers. Supply of labor was primarily constrained by COVID-19 safety concerns, childcare, and retirement benefits.

Fed Chair Jerome Powell told the U.S. Senate Banking Committee Tuesday that persistent inflation concerns have made the central bank consider speeding up the end of its bond-buying program a few months earlier from the initially agreed June 2022.

“Since the last meeting, we’ve seen basically elevated inflation pressures, we’ve seen very strong labor market data without any improvement in labor supply, we’ve seen strong spending data too,” Powell told members of the Senate Banking Committee. He added that “we are actually at our next meeting in a couple of weeks going to have a discussion about accelerating that taper by a few months.”