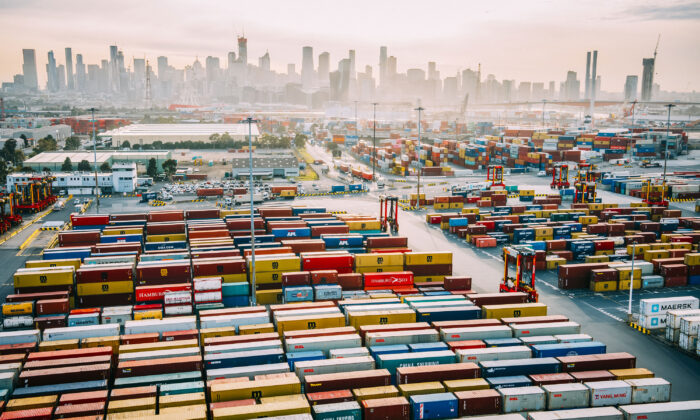 Australia’s economic recovery has been stunted by an international supply chain crisis, with businesses struggling to secure critical supplies—a problem many expect will persist into 2022.

The pandemic wrought by the CCP (Chinese Communist Party) virus has made timely sea freight a rare commodity, with the intermittent closure of ports cascading into the clogging of shipping lanes and delays in deliveries.

In Australia, lockdowns, border closures, and travel restrictions have placed further strain on freight deliveries due to the surge in demand for imported goods as consumers spend more time shopping online.

A survey by Australia’s peak industry body, Ai Group, revealed that these facts have resulted in close to two-thirds of all businesses reporting the year 2021 to have proven more difficult in sourcing supplies compared with earlier on in the pandemic in 2020.

And more than half of Australian businesses expect this to continue in 2022, with only 17 percent feeling optimistic about sourcing new supplies in the next year.

Ai Group Chief Executive Innes Willox warned that this situation was projected to only moderately ease by 2023.

“These pressures can undermine our economic recovery from the pandemic and ultimately dampen economic growth,” Willox said.

Australia’s economic development relies heavily on shipping, with one in five jobs connected to trade—98 percent of which is made by sea.

Many businesses have opted to place stockpiling as a priority to ensure uninterrupted supply to cover for periods of trade delays.

But Willox noted that some businesses had instead shifted away from doing business with riskier regions altogether.

“There is increasing concern about geostrategic tensions, trade conflicts and their associated unknowns,” Willox said.

“This creates real risks for businesses reliant on distant suppliers and generates an incentive to change the way they do business, and to avoid over-dependency on particular countries or regions (especially those where trade or diplomatic tensions exist).”

Over the last two years, Beijing attempted to punish Canberra through a politically motivated trade war that saw sanctions imposed on Australian coal, wine, barley, beef, lobster, timber, and cotton—many industries which have since successfully found other export opportunities.

However, many businesses have highlighted their desire to source locally instead to avoid this.

One business, in particular, noted that sales had seen a positive trend for some time after customers opted to buy locally to reduce reliance on overseas supply that was prone to delays and uncertainties.

However, Ai Group noted that, in reality, some products were either not produced economically in Australia or still depended on overseas components in their supply chains.

For example, despite being one of the world’s leaders in solar uptake—with one in four homes and non-residential buildings installing rooftop solar—Australia does not have a domestic solar manufacturing industry, except for one company that assembles pre-made components shipped from China.

“We do not want to be needing China for anything that is absolutely critical to our long-term future … If we are dependent on China for that, we could certainly find ourselves deprived of it when we need it most,” Abbott said in an interview with Hudson Institute on Nov. 1.