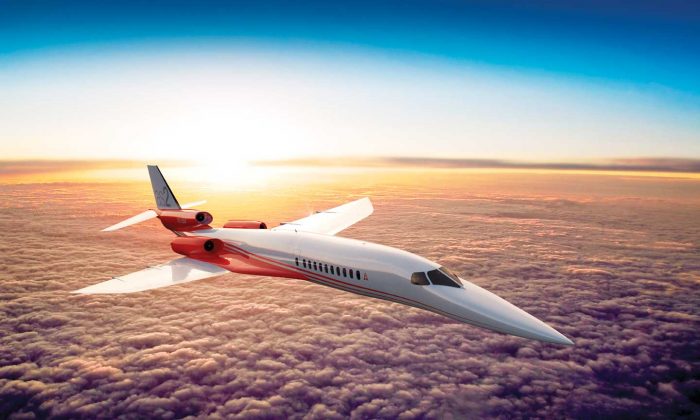 A digital design of the Aerion AS2 supersonic jet. (Courtesy of Aerion Corp.)
Business & Economy

Supersonic Jet: Airbus to Help US Company Build One

No matter whether you are flying business or economy, being stuck on a commercial airliner for half a day is a waste of time.

The good news: Cutting the 11 hours from London to San Francisco in half will now be possible sooner rather than later, thanks to commercial supersonic travel.

Nevada-based Aerion Corp. announced Tuesday it will work with European aircraft giant Airbus Group to get a supersonic jet to market by 2021.

“It puts us solidly on track toward our objective of certifying the world’s first supersonic business jet in 2021. Needless to say, we are thrilled with the resources Airbus Group will bring to the program,” said Aerion Chairman and billionaire investor Robert Bass.

The two companies will exchange technology and personnel to kick-start a development process that has already cost $100 million and started more than 10 years ago.

However, to get the $100 million model AS2, which will seat 19, to market, Airbus will also have to inject a large pot of money into the venture.

Total development costs are estimated to be as high as $3 billion but could pay off handsomely. Over 20 years, Aerion estimates the market for small supersonic jets could be as big as 600 jets or $60 billion. The two companies, however, said they will not disclose the amount of financial help.

Since the days of the Anglo-French Concorde—the last plane to complete a commercial supersonic trip—more than 10 years ago, supersonic travel has faced numerous problems. Aerion and others are working to solve them.

Because of the extremely loud sound wave or sonic boom the Concorde carried with it when flying at supersonic speeds, the FAA prohibited supersonic commercial travel above land in the United States. Aerion said it solved the problem by flying at low speeds up to Mach 1.2 (the maximum is Mach 1.6), so the sonic boom doesn’t reach the ground.

To comply with regulations, the AS2 is supposed to fly at various transonic and subsonic speeds overland to make it from Chicago to Frankfurt in five hours rather than eight or from New York to London in three to four hours, rather than six or seven. The greatest time savings will come from flying at max speed over the Atlantic or Pacific.

Aerion and other firms are also working to change the economics of supersonic travel with new technology. Concorde was inefficient in terms of production because too few units were produced, and in flight because too much fuel was burned during subsonic flight operation.

Aerion has a patent on a special design for wings to reduce air resistance, which makes it as fuel efficient during subsonic flight as during supersonic flights and plans to produce the craft in bulk—with the help of Airbus.

In terms of price, $100 million is $35 million more expensive than the most expensive corporate jet, the $65 million, Gulfstream G650, which flies as fast as 0.925 Mach. Because of its speed, the plane has a backlog until 2017, an indication that very wealthy people and corporations are willing to pay up in order to save time.

Despite the deep pockets of large corporations and wealthy individuals, the fuel dynamics will have to pan out in order to make the jets commercially viable.

Of course, Airbus rival Boeing is also working on a supersonic jet. It has been working with Lockheed Martin since 2010 and is swinging for the fences. It wants to completely muffle the sonic boom; something NASA said could be possible from 2025.