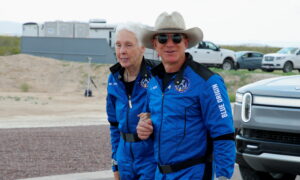 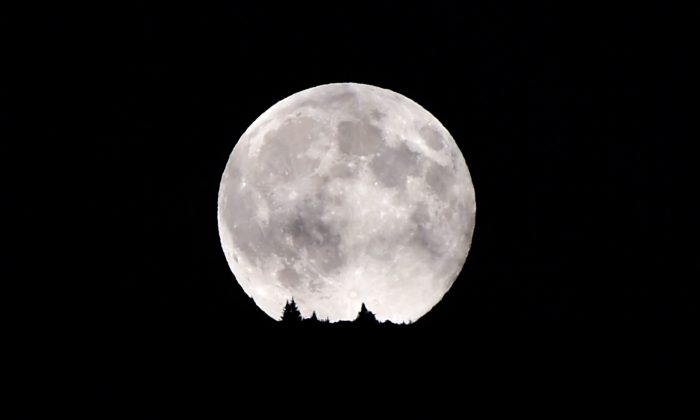 A full moon rises over the Dolomiti mountains in Levico Terme near Trento in north of Italy on August 10, 2014. (AFP/Getty Images)
Science

The last supermoon of 2014 is set to rise on Tuesday, September 9.

It will be the fifth supermoon of this year.

The term “super moon” describes a moon that is closer to Earth than usual.

The term came from astrologer Richard Nolle over 30 years ago, and is only now coming into popular usage, according to EarthSky. Nolle said a supermoon is “a new or full moon which occurs with the moon at or near (within 90 percent of) its closest approach to Earth in a given orbit.”

NASA notes that the scientific term for the phenomenon is “perigee moon.”

“Full Moons vary in size because of the oval shape of the Moon’s orbit. The Moon follows an elliptical path around Earth with one side (perigee) about 50,000 kilometers closer than the other (apogee). Full Moons that occur on the perigee side of the Moon’s orbit seem extra big and bright,” it said in a recent blog post.

“This coincidence happens three times in 2014. On July 12th and Sept 9th the Moon becomes full on the same day as perigee. On August 10th it becomes full during the same hour as perigee—arguably making it an extra-super Moon.”

The approximate size of the Full Moon at apogee and at perigee (a “Super Moon”). (Harvard-Smithsonian Center for Astrophysics).

Geza Gyuk, an astronomer at the Adler Planetarium in Chicago, says that the moon will be visible all night following the sunset, weather permitting.

“Just find a time that is convenient and where you can spend a few minutes just looking and appreciating,” he told National Geographic.

“Try and look for the moon when it is near the horizon, that’s when it gives an extra thrill, as it appears larger and more colorful than when it is overhead.”

The moon will rise above the eastern horizon after sunset and will set at sunrise in the west–these are times when the best pictures can be snapped.

“The setup isn’t too important, but I’d recommend something with not too large a field of view or the moon will simply seem too tiny, said Gyuk. “Slightly after sunset, when the moon is low in the sky and the sky is darkening, is very dramatic for viewing and photography.”