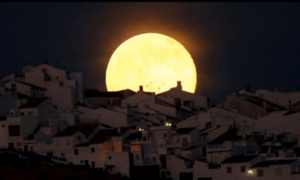 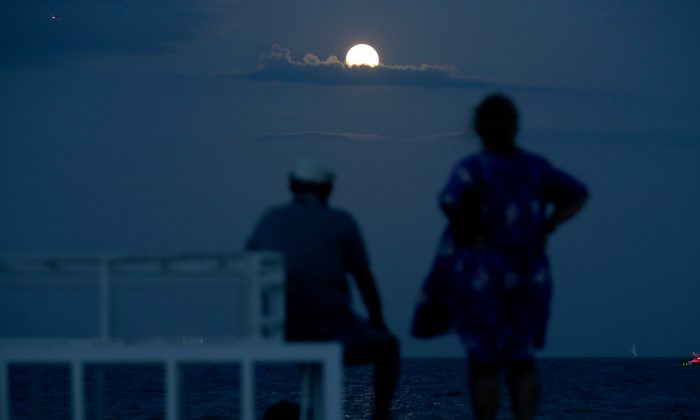 People on the beach watch as the supermoon rises from the clouds on August 10, 2014. (Photo by Joe Raedle/Getty Images)
US

A supermoon appears a little larger and brighter than a normal moon and occurs when a full moon lands on the same day the moon is closest to Earth in its orbit. The technical name is called a perigee moon.

“Generally speaking, full moons occur near perigee every 13 months and 18 days, so it’s not all that unusual,” said Geoff Chester of the US Naval Observatory in a NASA press release.

“In fact, just last year there were three perigee Moons in a row, but only one was widely reported.”

A supermoon happened on July 12, and will happen again on September 9—but neither is as big and bright as Sunday’s moon. This is because Sunday’s full moon was on the exact hour of perigee, according to NASA.

All full and new moons bring higher tides than normal, but supermoons bring the highest and lowest tides of all.

“We do have a large swinging tide, from a very low, low tide, to a high, high tide, and that can sometimes catch people off guard,” said Captain Jeff Horn with the Los Angeles County Fire Department’s Lifeguard Division at Cabrillo Beach on Monday.

“If they go out on a rocky place at low tide and they’re not aware that the tide’s rising, they can get stuck out on what becomes an island, and that can be dangerous.”

According to Horn, Cabrillo Beach had a larger than normal tidal swing of a negative one foot tide Monday morning to a 5.8 foot tide in the afternoon.

Sunday’s super moon also prompted rip current and tidal flooding advisories in other places in the US, such as the Jersey Shore.

August’s supermoon coincides with the yearly Perseid meteor shower, and the bright moonlight will make it a little harder to see the shooting stars. NASA recommends viewing the meteor shower on Tuesday or Wednesday morning to get the best view.