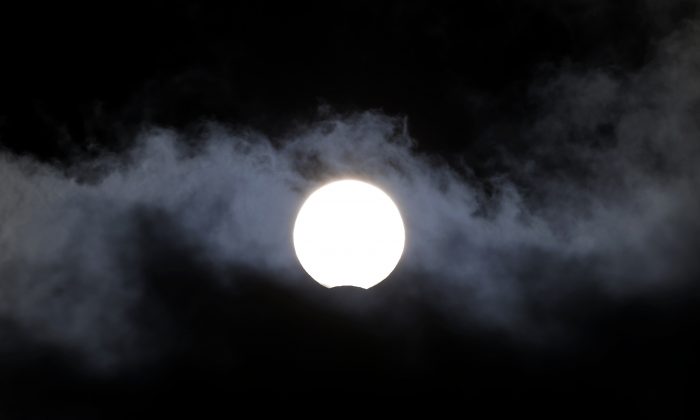 This Friday, there’s going to be a rare phenomenon: A supermoon, solar eclipse, and a vernal equinox will take place all on the same day. (AP Photo/Andres Kudacki)
Science

This Friday, there’s going to be a rare phenomenon: A supermoon, solar eclipse, and the spring equinox will all take place all on the same day.

March 20 is the start of spring 2015, also known as the vernal equinox. It also marks this year’s only total eclipse where the moon passes between the sun and the Earth.

The day also will feature a supermoon, which is when the moon is at its closest distance from the Earth and the sun.

“This is the first time since the turn of the century that a total solar eclipse has fallen on the same day as the start of spring, known as the vernal equinox. We won’t see an event like this again until the year 2034. And after that, the only other two such events will be in 2053 and 2072,” notes Business Insider.

And the solar eclipse is probably going to be amazing.

“Nothing, and I mean absolutely nothing, in nature is as powerful and spectacular as the totality of a solar eclipse,” Slooh Astronomer Bob Berman said, according to Accuweather.com. “Sadly, they only happen every 360 years on average for any given location, which means that a very low percentage of the population has ever seen one.”

The total eclipse will only be visible from the northern Atlantic Ocean, the site says.

The Slooh Observatory will host a live stream of the event, which can be seen here:

“Experts say the country’s electricity grid, which relies increasingly on renewable energy, faces a crucial test on the morning of March 20, when the moon will pass in front of the sun and block up to 82 percent of its light across Germany,” the news agency reported last week. “This partial eclipse will cause a sudden drop and then a surge in solar-generated power that will have to be balanced out to avoid instability in the grid, Germany’s Fraunhofer Institute for Solar Energy Systems said Friday.”

There are anywhere from three to six supermoons in given year.  There will be six in 2015, and two have already taken place. The other three will take place August, September and October.