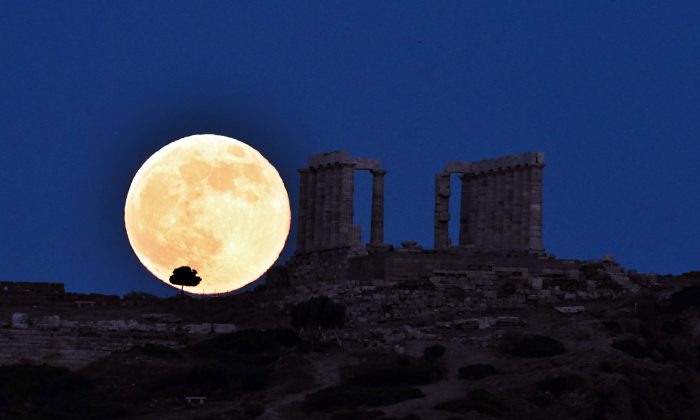 A supermoon rises next to the ancient Greek temple of Poseidon at Cape Sounion, some 65 kilometers south of Athens, on June 23, 2013. (Aris Messinis/AFP/Getty Images)
Science

Supermoon 2014: New Moon Could be Visible on January 30

The second supermoon of 2014 could be visible on January 30.

Supermoons refer to when the moon is closer to the Earth than usual–but only slightly closer. Because it is closer, it sometimes appears bigger.

“The ‘super’ in supermoon is really just the appearance of being closer,” said Dr. James Garvin, chief scientist at NASA’s Goddard Space Flight Center on the space agency’s website. These moons can appear “as much as 14% larger in the sky and 30% brighter to our eyes than at minimum size and brightness,” according to NASA.

So will the supermoon on January 30 appear bigger, or even be visible at all?

While normal supermoons are visible and sometimes appear bigger than usual–especially when they’re on or close to the horizon–the supermoon on January 30 may not be visible, even though the moon will be the second-closest to Earth this year.

The other three supermoons this year (one happened already on January 1) are slated for July 12, August 10, and September 9.

The moon will be the closest to the Earth on August 10.

As of right now, the probability of these moons being visible in the sky has not been determined.