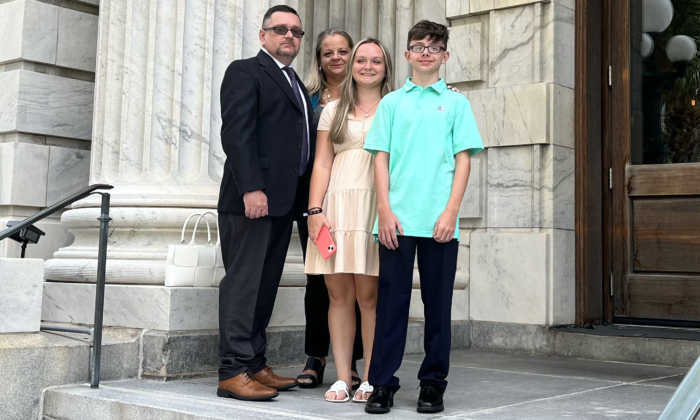 The Yuengling family outside the Sam Gibbons Courthouse in Tampa on August 8, 2022. (Family photo)
US News

A Florida county school superintendent transferred a 14-year-old girl out of her zoned school after the teen’s mom persevered in criticizing the school’s teachings under the protection of the state’s new parental rights law.

That’s what Richard and Rebecca Yuengling of Land O’ Lakes, a suburb of Tampa, allege in a federal lawsuit they filed on Aug. 5 against various officials of the Pasco County school district and Pasco County Sheriff’s Office.

The ordeal also led to the father losing his job as a court bailiff with the county sheriff’s office.

The lawsuit details how the Yuenglings’ daughter was reportedly escorted off the grounds of Cypress Creek High School and told she was no longer a student there. The school readily admitted that the expulsion resulted from the criticism of the school’s liberal teachings by the ninth grader’s mother.

The girl was crying and “visibly upset” during a “humiliating perp walk” in front of her friends, the lawsuit alleges.

The school didn’t give the parents an opportunity to appeal the transfer, “violating their rights to due process and equal protection,” the lawsuit alleges.

“It only got worse from there,” the Yuenglings, who are conservative Christians, told The Epoch Times following the filing of their lawsuit.

Less than three weeks after Richard Yuengling filed for a court injunction to stay the school’s decision, he found himself the subject of an internal affairs investigation.

Yuengling says he was told that he violated the sheriff department’s policy against wearing a uniform for personal gain or influence.

“I’m just a dad trying to stand up for my kids,” said Yuengling, a 22-year employee of the sheriff’s department and a Navy veteran, “I couldn’t believe they were doing this to me.”

He also was demoted to jail duty and was told by a sheriff’s captain that the actions were coming “from higher up,” he told The Epoch Times.

Jonathan O’Brien, one of the attorneys who filed the lawsuit on the Yuenglings’ behalf, told The Epoch Times that “it’s crazy disturbing” that such drastic measures were taken against the dad for wearing his uniform on a personal errand.

The lawsuit lists several “egregious examples” of activities other Pasco County sheriff’s deputies have been witnessed engaged in while in uniform, including testifying in their own divorce proceedings, disputing traffic tickets in another district, and shopping for major purchases such as automobiles.

“This is supposed to be a brotherhood in arms,” said O’Brien. “To have subordinates do the bidding of superiors to go after their brothers in arms is maybe the sign of times, but it is cowardly and disappointing.”

O’Brien said the public school has no legal standing to arbitrarily oust a child because the children have a constitutionally protected right to a free, public education.

The Yuenglings’ troubles began when Rebecca Yuengling asked the school to stop giving her daughter what she called inappropriate student surveys to complete.

“The reason I was so vocal was because they were having my kid fill out surveys that were sexual in nature and then telling them to keep it a secret,” she said. Her daughter’s teachers were also discussing gender ideology and critical race theories in class, she said.

The mother’s complaints escalated when she learned that after she told the school to stop giving her daughter surveys, her daughter’s history teacher handed out a survey for the class to complete on gender ideology, as part of a quiz that would count toward their grade.

After she reminded the school of the state’s new parental rights law that prohibits teachers from enticing or coercing students to keep information from their parents, Rebecca said School Superintendent Kurt Browning sent her a letter informing her that her daughter was no longer welcome at the school and offered to transfer her elsewhere in the district.

Browning said the Yuenglings’ 13-year-old son, who had just completed seventh grade at the district’s middle school, wouldn’t be allowed to attend the district’s Cypress Creek High School once he graduates from eighth grade.

“Since the beginning of the 2021-2022 school year, it has been evident that you are dissatisfied with Cypress Creek High School. Your voluminous emails (in excess of 500 pages), phone calls, public statements, and posts on social media are not only harassing in nature to administration and staff, but also disruptive to the learning environment for our students,” Browning wrote.

According to the lawsuit, Richard Yuengling was warned by the same sheriff’s captain who informed him that he was under investigation that Browning is a person he “shouldn’t mess with,” because he’s politically connected.

Browning, who is a former Florida secretary of state, didn’t respond to inquiries by The Epoch Times about the allegation or the lawsuit. Steve Hegarty, the Pasco County Schools’ public information officer, told The Epoch Times that the district doesn’t comment on pending litigation. Sheriff Chris Nocco, who also is named in the suit, also didn’t respond to inquiries.

Nocco and Browning have been the subject of investigations and other lawsuits.

In 2021, Browning found himself under investigation by the U.S. Department of Education after it was revealed he was providing Nocco with the grades, attendance, and discipline history of students for a private list used to identify kids that might fall into a “life of crime.”

The practice was dubbed “predictive profiling” in a petition against Browning and Nocco and Browning was eventually ordered by the school district to stop providing the information to Nocco’s department.

Nocco is currently the subject of three pending federal lawsuits over his Intelligence-Led Policing program, which enforces micro crimes that include a resident’s failure to put their house number on their mailbox.

Nocco, Browning, as well as the Yuenglings are all Republicans. Republicans, including Rep. Matt Gaetz (R-Fla.), have urged Gov. Ron DeSantis to remove Nocco from office.