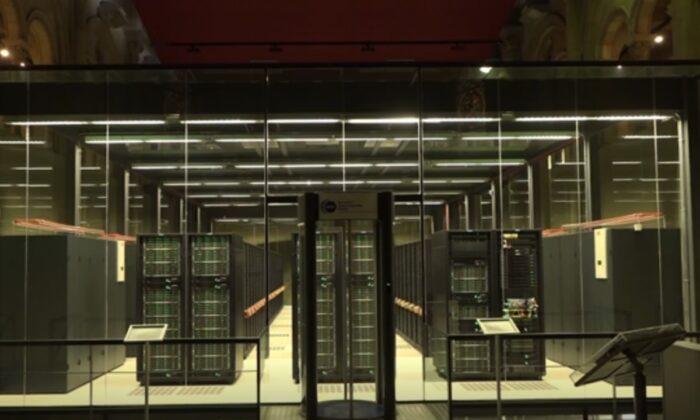 Each morning and for two hours, one of Europe’s largest supercomputers processes data from the eruption of the Cumbre Vieja to make short and mid-term predictions.

This science is known as Urgent Computing.

Since it started on Sept. 19, the eruption on the Spanish island of La Palma shows no signs of stopping. Scientists say it could last up to three months.

Housed inside a deconsecrated chapel, part of the Catalonia Polytechnic University (UPC), MareNostrum 4 is Spain’s largest supercomputer. It was named after the ancient Roman name of the Mediterranean Sea and was first booted up in April 2005.

At 8 a.m., the predictions are ready for senior researcher Arnau Folch to analyze. From them, he writes a daily report sent to the Plan of Volcanic Emergencies of the Canaries, Pevolca. But this isn’t the first time that MareNostrum has been used to analyze such geological events.

“Here at BSC, we’ve been making predictions on volcanic eruptions in other parts of the world. We have a long experience of doing that for many years. As for artificial intelligence, it doesn’t apply to these models. We use it for small components to enhance the entry of data in a given model,” says Folch.

MareNostrum models the circulation of the ash and gases released by the volcano and predicts their presence in the atmosphere in the following hours.

To compute all the data accurately and fast, it uses all of its 48 racks (chassis containing multiple computers), containing nearly 3,500 nodes (computers). Each node has 24 processors, amounting to more than 165,000 processors for the entire supercomputer.

At peak power, MareNostrum operates over 11,000 trillion operations per second, 10 times more than its predecessor MareNostrum 3. But to process all the data from the volcano, the supercomputer uses just 1,000 processors.

“The main indicators we use to predict the evolution of the eruption—and when it will end—are seismicity, ground deformation, and gases. Right now these indicators have been stable for a while. Deformation is gradually starting to slow down. When the volcanic tremor, deformation, and—above all—the amount of gases released substantially will decrease, we will start to see the light at the end of the tunnel. But so far the eruption continues,” says Folch.

A team of scientists deployed near the volcano uses the predictions from MareNostrum to help them analyze the evolution of the situation on-site.

Thanks to the supercomputer, forecasts, data assimilations, and impact analyses are increasingly used in the science community but also by decision-makers.

When it comes to geological predictions in the Canary Islands, landslides are feared the most, since they can cause tsunamis. Similar events were documented in Hawaii and, most recently, in Indonesia, where the island of Anak Krakatau collapsed in 2018, causing a deadly tsunami.

Arnau Folch doesn’t dismiss this possibility, but the frequency of landslides in the Canary Islands is low: once every 10,000 years.

“These massive landslides have happened in the past in the Canary Islands. We were able to prove it by looking at the shape of the orography and analyzing the seabed. But that doesn’t mean it will happen now. These phenomena occur on big timescales. Could it happen again in the future? It could, yes. But not in the short term,” says Floch.

The predictions are an easy task for MareNostrum. The same ones could be run on less powerful computers, but at a much slower pace. That’s why the supercomputer is the appropriate tool for it, to try to ensure lives are not lost because of slow prediction speeds, meaning delayed interventions for emergency services.

“Urgent Computing refers to the use of these big computational structures during times of emergency. When it comes to risks from nature, in the next few years it will become a fundamental tool. Because it allows us to have much more precise predictions in a very short timeframe. They can be done very fast. And that is very useful for decision-makers,” says Folch.

Lava flows have covered 970 hectares (2,400 acres) of land since the eruption began on Sept. 19, data from the European Union’s satellite monitoring service show.

On its way, the molten rock destroyed more than 2,000 buildings and forced the evacuation of more than 7,000 people.