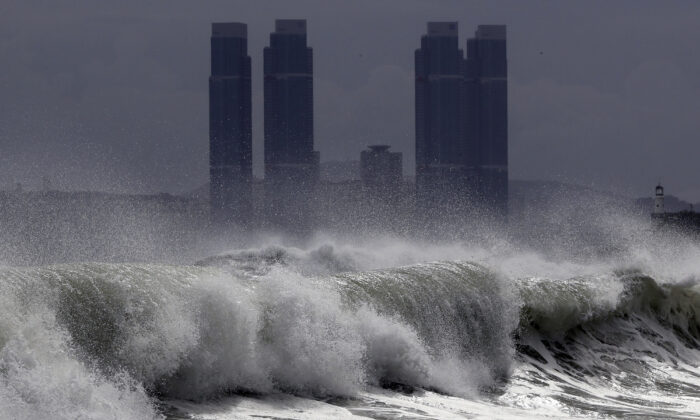 Typhoon Hinnamnor, which is deemed to be the strongest typhoon in South Korea’s history, is forecast to strike the country’s southern region next week, according to the state weather agency.

The Korea Meteorological Administration (KMA) forecasts the typhoon’s atmospheric pressure to reach 950 hectopascals when it hits South Korea, with a maximum wind speed of 43 meters per second (96 mph), The Korea Herald reported.

Typhoon Hinnamnor, the 11th typhoon this year, is rated as a “super strong typhoon” by the weather agency.

“[The country] has not seen a typhoon with such low pressure arriving here yet. The weather agency is concerned about unprecedented damages that can be brought by the typhoon,” said Woo Jin-kyu, weather analyst at KMA.

The typhoon is also predicted to make landfall in Japan. The Japan Meteorological Agency on Saturday classified the typhoon as “large” with a maximum wind speed of 40 meters per second (89 mph).

According to the KMA, the typhoon is currently passing the east coast of Taiwan and has begun to move northward, approaching the southern part of Jeju Island, Seogwipo. It is expected to pass the southern city of Busan on Tuesday.

“It is currently difficult to pinpoint which part of the southern coast of the Korean Peninsula will be directed hit by the typhoon,” Woo said, adding that the typhoon can reverse course and hit South Jeolla province.

The U.S. Embassy in South Korea issued a weather alert to U.S. nationals residing in the country regarding Typhoon Hinnamnor, warning that the typhoon could cause powerful wind gusts, high waves, mudslides, and flooding.

“Heavy rains country-wide are expected to begin on Sunday, September 4, followed by the typhoon making landfall on Monday around [9.00 p.m.]. Heavy rains may continue through Tuesday evening,” it stated.