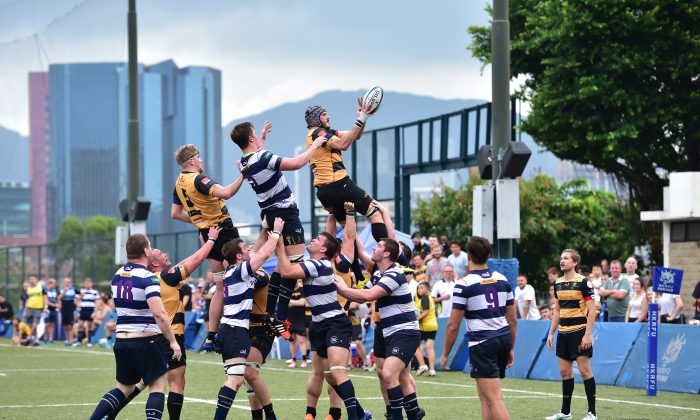 The matches were played in poor weather conditions as Typhoon Mujigae skirted Hong Kong, bringing gusty wind and heavy rain, that progressively worsened as the afternoon wore on.
Tigers vs. Club.

Tigers won an enthralling opening match against Club, 26-14. It was their first premiership win in two seasons, and was nothing less than they deserved. They opened the scoring after only 4minutes, when prop Dan Barlow rumbled over for a try. They kept the scoreboard ticking over, with Matt Price, their scrumhalf, punishing Club indiscretions with three well-taken penalties, that extended the Tigers lead to 16-0. Club eventually scored, through centre Ben Axten-Burret, after a period of sustained pressure. The try was converted by Niall Rowark, who was having a mixed afternoon with his kicking. At half time the score was 16-7 to Tigers.

The second half belonged to Tigers. They pressured the Club line. Forced errors from Club, and eased into a 19-7 lead. Club, when they finally managed to secure time in the Tigers 22, scored a well-worked try by flanker Edward Botha, to make the score 19-14, after 67minutes.

Tigers responded immediately; determined not to be denied a win. They industrially worked their way back into the Club half, and flyhalf Simeon James scored in the corner. The try was converted by Price, putting Tigers ahead 26-14, with ten minutes to play.

Despite a final effort by Club, Tigers defended superbly, executed the basics well and thoroughly deserved their long-awaited victory. There will be hopefully more victories to come. This will be confidence boost for Tigers and a great start to the season for new coach Craig Stewart.

HKCC vs. Kowloon
HKCC, the defending League champions, comfortably defeated Kowloon 26-10. As the afternoon wore on, the weather progressively worsened. This game was played in pelting wind and rain. Both teams did remarkably well, under difficult playing conditions. HKCC mastered the weather better, dominated the breakdown, and flyhalf Jason Kjestrup was very comfortable kicking either for territory or points. After 30minutes, dominant forward pressure by HKCC, along with the sin-binning of Kowloon flanker Phil Whitfield, resulted in both a penalty and penalty try for HKCC. Then at 38minutes, HKCC scrumhalf, Rhodri Needham scored again with Kjestrup converting. By half-time HKCC led 23-3 and looked comfortably in control.

Kowloon clawed back points with a well-crafted try in the second half after 57minutes, scored by centre Jack Neville, and converted by Chris MacAdam. This was against the run of play, and further HKCC pressure led to another penalty to secure a 26-10 victory.

It was a good start to the season for HKCC. They deservedly edged Kowloon through better discipline in the forwards, Jason Kjestrup’s secure kicking, and their overall mastery of the appalling weathers conditions.

Valley vs. Scottish
The final match saw the reigning Grand champions Valley face Scottish. Again, this match was played in wet, windy conditions. Credit must go to both teams who tried to play good basic rugby. Ultimately, it was Valley, who made the fewer errors and created the better opportunities.
6minutes into the match, Valley went ahead with a penalty by Reece Hamon, who was to prove assured with his kicking throughout the match, despite the difficult conditions. Scottish responded with a neatly worked try after 11minutes. Scottish flyhalf David Bird, missed the conversion; however, minutes later he scored a penalty kick, to give Scottish the lead 3-8.
After 26minutes, with Valley pinning Scottish back in their 22, Valley prop Leon Wei Hon Sum bustled over for a well-worked forwards try. Hamon was unable to convert, and the score stood at 8-8; a penalty and try a piece for Valley and Scottish.

On 31minutes, after a clever kick and chase, Adrian Braha Lonchant scored a critical try, with an electric turn of pace to outsprint the Scottish cover. This time Hamon converted, and by half time Valley led 15-8, and slowly tightened their grip on the game.

The second half saw Valley score three more penalties, from the secure boot of Hamon, and establish a 24-8 lead, that was never threatened.

Despite, the weather the games were a solid opening display for the Premiership season. Front runners HKCC and Valley both won, but there was ample evidence from both Kowloon and Scottish, that matches will be a close contest this season. ‘Bragging rights’ belonged to Tigers. They earned their ‘stripes’ with their first win in two seasons.

Grahame Carder is a sports enthusiast and former player from representative Schoolboy level, through University and most corners where he has lived, Currently works as Consultant on Strategy and Marketing.