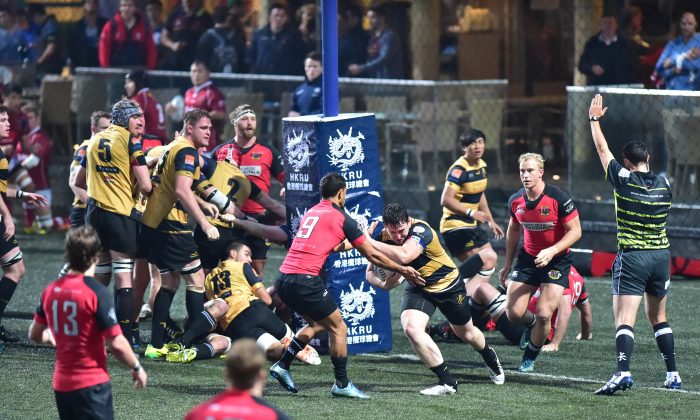 Important play: Valley are awarded a penalty try when 14-10 down against USRC Tigers, 25 mins into the second half, Tigers hit back with the runaway try by No 11 Chester Mbekela to take them to 19-17 but Ben Rimene converts a penalty for Valley to clinch a tight match 20-19 in the HKRFU Premiership match at Sports Road on Saturday Jan 16, 2016. (Bill Cox/Epoch Times)
HK Rugby Union

Hong Kong—Saturday was a day of ‘nearly games’. The six teams in the Hong Kong Premiership played back-to-back matches at the Hong Kong Football Club on Saturday Jan 16, in the final ‘Super Saturday’ prior to the play-offs, and every game could have been won by either team.

The weather was a dampener: misty, rainy, and miserable, and at times the players looked keener to be off the pitch than on it, but the matches were close, provided good entertainment, and the results could have gone either way.

Scottish began well, and opened up a 0-10 lead, with a try by winger Austin Robertshaw, and conversion and penalty by scrumhalf Charles Cheung. HKCC bounced back with 14 unanswered points within 5minutes, starting with the impressive Marcus Slade, at No.8 scoring a pushover try, and winger Jonathan Patterson scoring again immediately from the restart. Flyhalf Jason Kestrup converted both tries and HKCC led 14-10 after 30minutes. Two late penalties in the first half by Scottish scrumhalf Charles Cheung gave Scottish a 14-16 lead at half time, and a sense that an upset was on the cards.

That was dispelled immediately after the break. HKCC scored a try after 3minutes, with winger Rowan Varty finishing a fine move. The try was converted by Kjestrup, to give HKCC a 21-16 lead. Sadly, Scottish missed a crucial kickable penalty 7minutes later, and the game subtlety slipped in favour of HKCC. Scottish clawed a penalty back, converted by fullback Ben Tyler. Then two penalties for HKCC, converted by Alex MacQueen, and a try by Matt Lamming after 36minutes, converted by MacQueen, pushed the score to 34-19 to HKCC, with a try bonus point for good measure. HKCC deserved the spoils, but were gamely pushed by Scottish for the first 60minutes of the match, and secures their position as the team most likely to face Valley at the end of the season.

In the second match, Societe Generale Valley played Borelli Walsh Tigers. This was a close contest; Valley won 20-19, with a penalty kick by the reliable Ben Rimene on 77minutes. Victory extended their unbeaten start to the season, but it was close. Rimene opened the scoring for Valley with a penalty after 10minues, but it wasn’t until the end of the half that centre Nicolas Holton crossed for Valley. Rimene added the conversion, and Valley led 10-0 at halftime. It was a sluggish half for Valley, who dominated possession but made little of it, despite Tigers being down to 13 players, with the double sin-binning of winger Eric Kwok and lock Craig Lodge.

Tigers proved sharper in the second half, scoring an early try by fullback, Casey Stone, which was converted by flyhalf Liam Gallaher, to reduce the deficit to 10-7. Then Valley had two players sin-binned, both forwards, Adam Campbell and Toby Fenn, and momentum shifted to Tigers. They scored a rumbling forwards try, by Daly Meiklejohn, converted by Gallaher, and took the lead 10-14 after 60minutes.

Once Valley restored numerical parity of the pitch, they forced a penalty try, converted by Rimene, to retake the lead 17-14; but Tigers responded in style with an impressive try by winger Chester Mbekela. It was unconverted, but Tigers held the lead 17-19, until the 77th minute, when Rimene’s penalty gave Valley the edge, 20-19. A one point lead was enough for victory.

Valley won, just; but Tigers playing at pace, exposed Valley, and perhaps the weight of their unbeaten start is a burden they could do with losing. On this occasion, perhaps the better team on the day lost.

In the final match Natixis Hong Kong Football Club beat Sabre Kowloon 13-10. Another close match: Kowloon led 0-10 at halftime, and Club narrowed the score to 7-10 at the start of the second half, and then leveled the scores with a penalty after 60minutes, only to break Kowloon’s heart with a 78th penalty by flyhalf Niall Rowark to give Club, a 13-10 victory.

Three close games: but the results leave Valley well clear at the head of the table on 48points, and HKCC look increasingly secure in second place on 27points, with a game in hand. Club is now third with 23points, Tigers fourth with 21points, Scottish fifth with 20points and Kowloon sixth with 12points. The battle is for the remaining two play-off slots, Valley appear safe, HKCC looking solid in second place; leaving three teams, Club, Tigers and Scottish fighting for the final two slots.