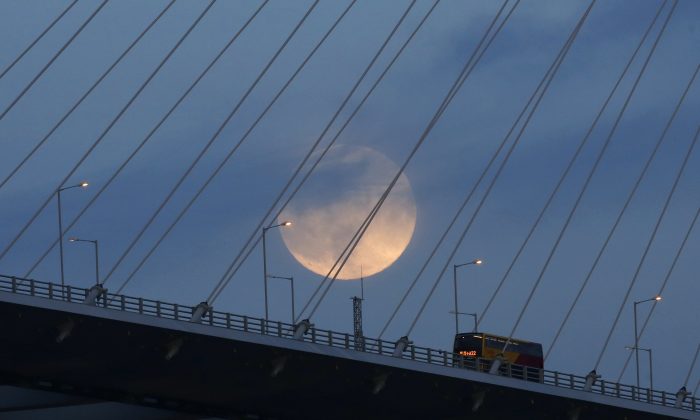 A perigee moon, also known as a super moon, raises over a bridge in Hong Kong Sunday, Aug. 10, 2014. The phenomenon, which scientists call a "perigee moon," occurs when the moon is near the horizon and appears larger and brighter than other full moons. (AP Photo/Kin Cheung)
Science

Another supermoon is upon us this weekend, coming at night on August 10 into the next morning.

The term “super moon” describes a moon that is closer to Earth than usual.

“Astronomers typically measure the distance between bodies as the distance between their centers (rather than their surfaces). At the Full Moon on August 10th, the centers of the Earth and Moon will be 221,765 miles apart. (The surfaces of the two bodies will be 216,068 miles apart.) How does this compare to the furthest Full Moon of 2014? The most distant Full Moon (when the Full Moon was near apogee – the farthest distance from Earth) occurred on January 15 of this year, when the centers of the bodies were 257,607 miles apart,” explained the Harvard-Smithsonian Center for Astrophysics.

“So this month’s Full Moon will be 35,842 miles closer than that of January. The difference in distance is 12.2 percent. If you saw both objects side by side, you could tell the difference. Lacking that, the two Moons will appear essentially the same in size. And, since the area of the Moon is a function of its diameter, the August Moon will be 26% brighter than that of January. Again, if you could see them side by side, you’d notice the difference, but when humans go on memory, the results are often unreliable.”

The approximate size of the Full Moon at apogee and at perigee (a “Super Moon”). (Harvard-Smithsonian Center for Astrophysics).

“I think when we have a super-close full moon, it’s like it grabs us by the shoulders and demands that we pay attention,” Krisciunas said.

The last supermoon this year will be on September 9. There are actually six supermoons projected for next year–on January 20, February 18, March 20, August 29, September 28, October 27.