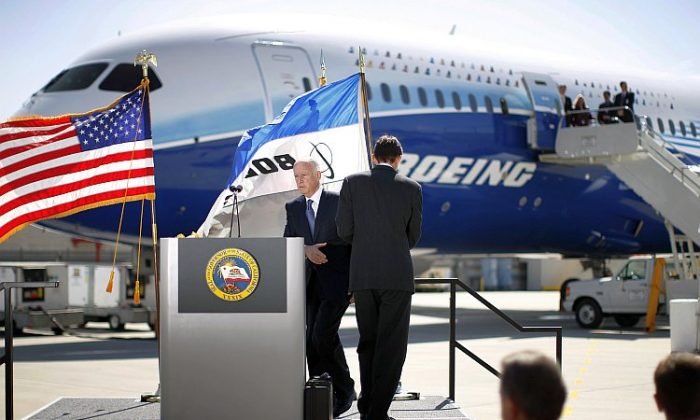 California Gov. Jerry Brown steps to the podium to speak at a presentation of the new Boeing 787 Dreamliner passenger jet, March 14 in Long Beach, Calif. (David McNew/Getty Images)
US

Boeing’s Dreamliner 787 is now officially set to transport passengers on international flights to and from the United States—flying routes that have never been flown commercially before. This comes after two Dreamliners were recently delivered to Tokyo, Japan.

Japan Airlines (JAL) is the first to open up international routes involving American territory since the plane was formally introduced to Japan for domestic use in September 2011.

The first U.S. flight, between Tokyo and Boston, is expected to operate on April 22. The 787 will follow up its inaugural U.S. flight with a San Diego destination. Additional routes, including Seattle and San Jose, are among others being planned for the near future.

Before the jets took off for Japan, a ceremony celebrating the new routes was held in Everett, Wash. The president of Japan Airlines, Yoshiharu Ueki, attended the affair.

“JAL will be the first airline to start new routes that have never been flown before by taking full advantage of the efficiencies of this aircraft, starting with Boston service next month and San Diego later this year,” said Ueki at the ceremony.

The mid-sized Dreamliner was created specifically for “long, thin routes,” or in other words, a route that is “long” beyond the range of smaller aircraft, but “thin” in the route’s low passenger volume that would not normally fill a larger plane.

Jim Albaugh, chief of Boeing Commercial Airplanes, said at the 787’s takeoff ceremony in Everett, “Launch of this new route reflects how capable this airplane is.”

As airlines around the world have increased their preference for more efficient airplanes, Boeing responded with the 787.

The Dreamliner is being met with praise by airlines around the world for bringing big-jet ranges to mid-sized airplanes. The results have produced a plane that uses 20 percent less fuel than similarly sized aircraft.

A major aspect of the increase in fuel efficiency is the use of GE’s GEnx-1B engines (the engine on the planes destined for the U.S. routes), as well as Rolls Royce’s Trent 1000, the engine being used on other Dreamliners.

The use of the American company’s engine has greatly reduced its emissions. The Dreamliner’s current emission levels stand 95 percent below standard regulatory levels.

The plane also has other forms of environmentally friendly, advanced technology—such as its use of carbon fiber, a high-tech plastic that is strong yet lightweight. The carbon fiber body is being used as a replacement for aluminum.

At the end of a 787’s service life, all the materials used on it are recyclable.

Moreover, Boeing engineers have incorporated a health-monitoring system into the 787s, allowing the plane to both self-monitor and report system requirements and updates to a ground-based computer.

With the Dreamliner’s environmentally progressive technology, which aims at consuming less fuel, generating fewer emissions, and manufacturing using less hazardous material, the jets are also being heralded for a decrease in the noise that could affect communities around airports. Acoustically treated engine inlets ensure that the 787s are no louder than 85 decibels, or sounds slightly louder than a busy street intersection.

Since its introduction, the plane has been continually recognized for its aviation superiority.

The Living Legends of Aviation organization honored the Boeing Dreamliner 787 with the “Aircraft of Legend Award” earlier this year for the aircraft’s “significant contributions to aviation.”

Also earlier this year, the National Aeronautic Association presented Boeing with two certificates of confirmation for the Dreamliner’s feat of breaking two world records in 2011.

One record was for the longest flight, while the other was for completing the fastest trip around the world. Both records were issued under the Dreamliner’s weight class requirements.

Jim Albaugh received the certificates at the ceremony held in Everett. “These world records demonstrate what we have been saying about the 787 all along—it is a world-class product. The airlines told us they wanted an airplane that was fuel-efficient, durable, and capable,” he said. “That’s what we are delivering with the Dreamliner.”