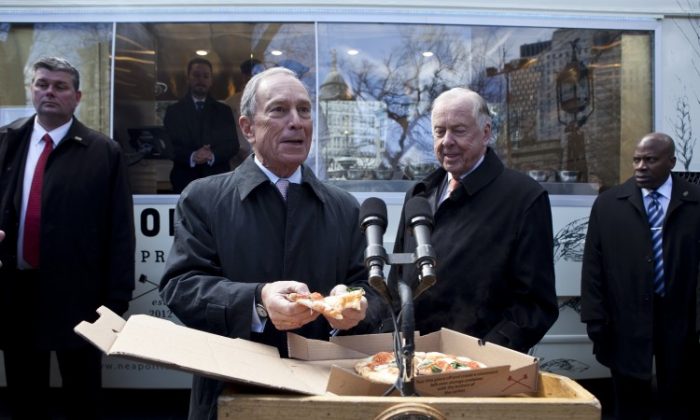 Mayor Michael Bloomberg (2nd from left) introduced the large sugary drink ban, which would have made stores that are given health grades by the city serve drinks that have more than 50 calories in bottles or cups no larger than 16 ounces. Experts say there are other ways to achieve the purpose of the proposed ban, which is temporarily blocked, that is, to help curb obesity. (Samira Bouaou/The Epoch Times)
New York

NEW YORK—The impetus for the large sugary drink ban, or soda ban, was fighting “the obesity epidemic,” according to Mayor Michael Bloomberg and his health officials.

The ban was considered invalid by a judge recently and will not be implemented unless an appeals court overturns the decision. The Epoch Times asked experts what alternatives could be considered to accomplish what the ban was meant to.

Encourage People to Weigh Themselves Every Day

While it’s difficult for people to see the effects of consuming too many calories short term, having them weigh themselves every day and chart it out can block weight gain, according to a Cornell University researcher.

“If you give these freshmen scales, you have them weigh themselves, and you have them look at a graph of themselves every day, you can block this weight gain totally,” said David Levitsky, professor at Cornell’s College of Human Ecology.

Levitsky has been involved in studying whether this works for different subgroups, starting with college freshmen, “now notorious for gaining weight.”

Though it’s the only study published so far, he and other researchers have been experimenting with this method with staff members at Cornell, who are on average much older than college freshmen. And they just started looking at children in Alabama.

“We’re going to see if we can prevent adolescent obesity by having pre-adolescent, obese kids use the scales to prevent the weight gain,” he said. “So as their height increases through adolescence, they’ll get thin.”

One way to get people involved in this method would be for the government to give out free scales, though Levitsky says not enough research has been completed to confirm this method will work over different age groups.

A Tax on Soda

Two years before the large sugary drink ban was proposed, Bloomberg urged the state to pass a soda tax.

“Today, I’m urging Albany to take one simple step to avert this crisis: Setting a penny-per-ounce tax on heavily sweetened sodas and beverages, and dedicating the revenue to education and Medicaid,” said Bloomberg on March 7, 2010, during his weekly radio address.

A 12-cent surcharge per can of soda could raise nearly $1 billion per year, according to Bloomberg. The city would prevent, over the course of a year, 150,000 New Yorkers and 60,000 New York City residents from becoming obese.

“By making heavily sugared drinks just a little bit more expensive, we can make a major dent in obesity—just as we’ve made a major dent in smoking by raising cigarette taxes,” he said. “Today, compared to eight years ago, there are 350,000 fewer New Yorkers smoking. Our penny-per-ounce soda proposal would have a similar benefit. It should cut consumption of these unhealthy drinks by at least 10 percent.”

Dariush Mozaffarian, associate professor in the Department of Epidemiology at the Harvard School of Public Health, said if a tax added 10 to 20 percent to the cost of soda, it would be effective. “That’s been well-demonstrated,” he said. “And even a smaller tax would be effective for the most vulnerable sub-groups: for people with lower income, or children, who are actually most vulnerable and consume the most.”

“Many studies we have done have shown that would be effective, but the legislature wouldn’t go along with it,” said Dr. Mozaffarian. “A tax would be such a natural way to go and really should be done.”

Mandating something creates resistance from people who perceive the action as taking away freedom, says David Just, a professor of Behavioral Economics at Cornell University.

Instead, the city could work with the large manufacturers, such as PepsiCo, that have been so opposed to the soda ban, and encourage them to provide smaller size options while retaining the large ones. The manufacturers would then work with the smaller, independent stores across the city to tweak marketing and product placement, such as putting the healthier and smaller options near the front of the store.

“We’ve actually seen this in a lot of our own research: if you call something a normal size, people flock to it,” said Just. “That doesn’t necessarily harm the vendors, because they can charge similar amounts for it, even if it is a little bit smaller.”

“These companies really are looking for ways to avoid the label of ‘Big food making you fat,’ or something along those lines—they don’t want to be the evil food company,” said Just. “I think they would be plenty willing to do this. I know they’re already spending millions and millions of dollars trying to get people to choose healthier things.”

Gradually Take Sugar Out of Foods

Though likely a better fit for a national policy, one way to decrease sugar consumption would be to ask chain restaurants and retailers such as Trader Joe’s to reduce sugar in the products they sell by a certain percentage every year, says Stephen Sugarman, Roger J. Traynor Professor of Law at the University of California’s Berkeley Law School.

“You require them to reduce the amount of added sugar that passes through their cash registers, by, let’s say, five percent a year,” said Sugarman. “And you just let them figure out how to do that—as long as they meet the target then there’s no tax, no penalty. Any individual shopper can keep on buying whatever he or she wants, but the company, just as they seduce us into buying the type of diet we buy now, will have to seduce us into buying an increasingly less sugary diet. After five or six or seven years, we’d have a 25 percent reduction in sugar consumption, which would be a substantial change in the American diet.”

The initiative would work better nationally than at the city or state level, according to Sugarman, otherwise people might shop in another city or state that doesn’t have the policy, especially if they close to a border. He said it could work in New York City with proper study.