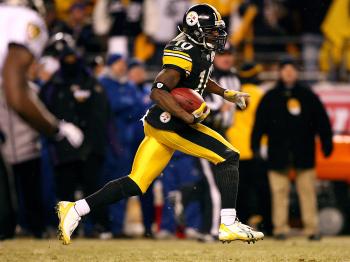 Santonio Holmes #10 of the Pittsburgh Steelers runs for a 65-yard touchdown against the Baltimore Ravens during the AFC Championship game on January 18. (Al Bello/Getty Images)
NFL

Pittsburgh previously, in their era of four Super Bowl wins in six years, took on the only other 9-7 team aside from this year's Arizona team to make it to the ultimate game. Those were the 1979-80 Los Angeles Rams, who actually led the game at the start of the fourth quarter, before the Steelers aired it out and won going away.

An interesting aside about that 1980 game: Pittsburgh won by 12 points, which was vindication after they had been criticized for beating the Dallas Cowboys by only four points the previous year's Super Bowl. Proof that winning the big game doesn't necessarily silence all grousing!

Look Back at XIX

However, a better comparison to reflect on might be the 1985 game between the Miami Dolphins and San Francisco 49ers. Consider the parallels.

Miami featured a prolific, supposedly unstoppable offense with a young Dan Marino and two fleet wideouts named Mark—Clayton and Duper. Marino was the first to throw for 5,000 yards in a season, with the Marks each catching more than 1,300 yards worth.

San Francisco had Joe Montana in his prime, an array of offensive weapons, and a defense full of stars. The 49ers had won the big one three years prior.

The 49ers thumped the Dolphins 38-16. Defense was the clear difference.

This year, the Arizona Cardinals have a prolific, supposedly unstoppable offense, led by QB Kurt Warner and three 1,000-yard wideouts. Warner has done this before, winning one Super Bowl and losing one early in the decade with the St. Louis Rams. They beat the league's no. 3 defense (Philadelphia) to get here this year.

The Pittsburgh Steelers have Ben Roethlisberger in his prime, an array of offensive weapons now that Willie Parker is healthy, and a defense full of stars. The Steelers won the big one three years ago, but only 22 players remain from that team. This team features a mix of veterans who have been there, plus a lot of hungry guys, including head coach Mike Tomlin, who want to claim a piece of history.

Both teams seem to be playing at their peak, but that was the case 29 years ago for Miami and San Francisco.

Don't expect a blowout like 1985, but expect the top-ranked Pittsburgh defense to make the difference. Fatal errors on offense or special teams are possible, but unlikely for the well-focused Steelers. This game will go to the team with the far superior defense.