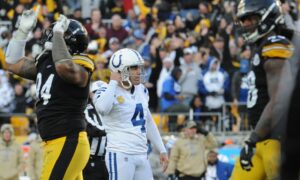 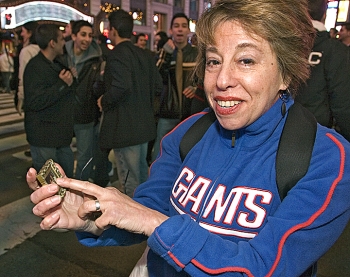 Giants super-fan Joanne Flaster holds a photo of her father in Times Square as she watched her team triumph over the Patriots in Super Bowl XLII. (Dayin Chen/The Epoch Times)
NFL

A Super Bowl Victory For Dad

NEW YORK—New York City native Joanne Flaster stood in the middle of Times Square last Sunday wearing her New York Giants pullover. Amidst the intense celebration in the background, all Joanne could do was stare at the Jumbotron speechless and teary eyed.

For Joanne, this was more than just a Super Bowl victory. Joanne's family has been Giants season ticket holders since 1960. Her father, George, used to attend the games when they were played at Yankee Stadium. She remembers most the cold Sunday afternoons spent with her father bundled up in blankets and hand warmers as they braved the cold and watched their team wage battle on the gridiron.

George passed away 14 years ago and Joanne has been "carrying the torch" for her father ever since.

Two weeks ago, when Giants kicker Lawrence Tynes missed what would have been the NFC Championship game-winning field goal late in the fourth quarter against the Green Bay Packers, Joanne left the bar thinking that it was finished—again.

Naturally, Joanne wasn't alone. The G-men were no strangers to making early playoff exits, after all. Joanne walked out of the bar that night and took out the pocket-sized framed photo of her father that she carries every post-season.

Like other seasons, she would often talk to her father throughout the playoffs. Having witnessed her Giants fight hard for nearly 60 minutes in a minus-24 degree wind chill, only to miss the game-winning field goal with seconds left to play, Joanne lost hope. She looked down at her father and said "Dad, please, if you can hear me, give me a sign, just give me any sign that you can hear me."

The sign came in the form of a truck driver, shouting, "The Giants won! The Giants won!" Joanne was shocked. Was her father answering her by saying, "Hang in there Joanne, hang in there for the both of us?" Or was it just the football gods teasing Giants fans by propelling them into Super Bowl XLII only to face the undefeated New England Patriots?

Joanne said, "There had to be a reason for all this." She refused to believe that the Giants made it this far only to lose to one of the best teams in football history. The cruelty of something like that was completely "illogical" she thought. "We didn't make it this far to come up short."

During last Sunday's Super Bowl, Joanne's new-found hope took a hit when the Patriots scored to take a 14–10 lead with only 2:45 to go in the fourth quarter. Things looked bleak for the New York Giants once again. All Joanne could do was clutch her father's photograph and wait.

But then, Giants QB Eli Manning would do the unthinkable. Evading tacklers clutching at his jersey, Manning hurled the ball downfield to David Tyree who made an unbelievable grab in heavy coverage.

That play, which will go down in history as one of the greatest, lead to a Manning TD pass to Plaxico Burress, giving the G-men a 17–14 lead with 35 seconds left.

But Tom Brady and the Pats had one last chance.

As Brady heaved a prayer to Randy Moss on the last play of the game that ended incomplete, Joanne's prayers were answered. The rollercoaster ride of emotions that comes with being a Giants fan was over.

As the masses hooted and hollered in the middle of Times Square to celebrate the Giants' third Lombardi trophy, Joanne stood calm and speechless with tears flowing down her cheeks.

She looked down at her father's photo once more and said, "We did it Dad, we did it."