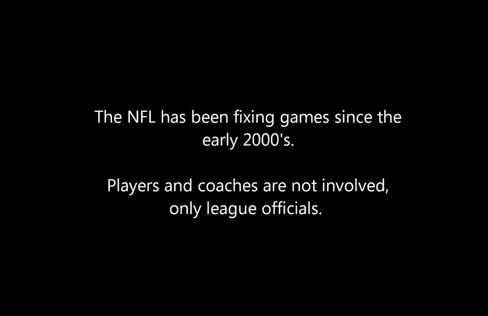 The Super Bowl was rigged, claimed a recent article. But that article turned out to be from a fake news website similar to the Onion.

Nevertheless, it set off conspiracy theories about the game being fixed–particularly because it was such a blowout.

The story claimed that one of the referees overheard Broncos quarterback Peyton Manning asking Seahawks head coach Pete Carroll: “When are you going to pay up?”

The website that published the story, Huzlers.com, regularly published fake news stories such as one about President Barack Obama outlawing twerking.

In the wake of the story, a video has been published alleging that the NFC championship game was fixed.

The person who published the video said that it was the sixth game rigged since 2007.

” We are not Sea or SF fans.  The point is to expose to the fans when these games happen,” the person said. “No the Super Bowl was not rigged, as you clearly saw, the officials stayed out of the game and let it play.”

The video has gotten over 500,000 views in the last couple days but people are divided as to whether it is right or not.

“I am not a 49ers or Seahawks fan, i have to say this cause i do not want to sound like I have a bias,” said one user. “But watching the game most of these plays I called out saying what happen. A lot of these calls are shady and seem to favor the Seahawks a lot.”