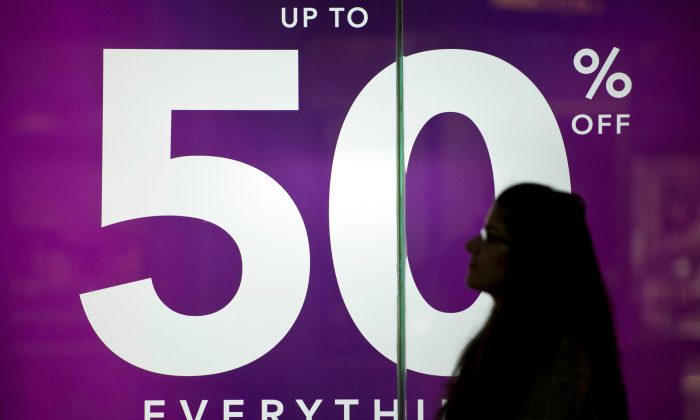 A shoppers walks through the Trafford Centre shopping mall past a retailer offering 'Black Friday' discounts in Manchester, northern England, on Nov. 27, 2015. Black Friday, is a sales offer originating from the U.S. where retailers slash prices on the day after the Thanksgiving holiday. (Oli Scarff/AFP/Getty Images)
Business & Economy

Super Bowl of Shopping Is More Like a Scrimmage

NEW YORK—The annual ritual of Black Friday, as we know it, is over.

Gone are the throngs of frenzied shoppers camping out for days ahead of the big sales bonanza on the day after Thanksgiving. And forget the fisticuffs over flat-screen TVs.

Instead, stores around the country had sparse parking lots, calm, orderly lines, and modest traffic. Black Friday, which traditionally is the biggest shopping day of the year, almost looked like a normal shopping day. And not every shopper was happy about that.

In Denver, for instance, Susan Montoya had nearly an entire Kmart to herself Friday morning. Montoya half-heartedly flipped through a rack of girls’ holiday party dresses and looked down the store’s empty aisles.

Black Friday for decades was a rite of passage for U.S. shoppers. Many would spend Thanksgiving evening combing through circulars to plot their shopping route for the next day based on the deals they hoped to snag.

But in recent years, retailers have started offering mega-discounts in stores and online earlier instead of waiting until Black Friday. And in the last few years, they’ve opened locations on Thanksgiving Day, a once-sacred holiday from retail.

How Black Friday Played Out Around the Country

That has led to the “graying” of Black Friday. In fact, according to the National Retail Federation, the nation’s largest retail trade group, nearly 60 percent of shoppers had already started holiday buying by Nov. 10.

Early numbers aren’t out yet, but the retail group expected about 30 million people shopped on Thanksgiving and 99.7 million on Black Friday. It also expects about 135.8 million people will be shopping during the four-day weekend, compared with 133.7 million last year.

The group estimates overall sales for November and December will rise 3.7 percent to $630.5 billion compared with last year.

Judging from the crowds so far, though, the shopper numbers could be hard to come by. “The frenzy and traffic levels were subdued,” said Craig Johnson, president of Customer Growth Partners, a retail consultancy.

Here are the three biggest reasons for the graying of Black Friday:

You Don’t Have to Wait for Discounts

Many stores pushed discounts on holiday merchandise early. Because of that, some shoppers weren’t excited about discounts on Thanksgiving and Black Friday.

Jeff Simpson, a principal at Deloitte, also said doorbusters—fat discounts on hot items that once drew shoppers in for store openings—are losing their “umph.” Ten years ago, major retailers would focus on the 10 best items and discount them below costs, he said. Now, many stores offer several hundred doorbusters, and many of the items don’t carry a name brand.

“They got watered down,” he said. “When you run that many doorbusters, can they really be that special?”

Some shoppers already are jaded about Black Friday deals. Take Bintou Cham, who got discounts of 40 to 50 percent at J.C. Penney and other stores in New York City, but was hoping for more.

Many stores made their deals available online and in stores for the official start of the season.

It’s not clear whether that move made more people shop online instead of heading to stores. But Deloitte’s Simpson said retailers need shoppers in the stores. “You tend to buy fewer items online,” he said.

But executives from top retailers including Wal-Mart, Target and J. C. Penney dismiss the chatter about the irrelevance of Black Friday, saying they have worked hard to blend their online operations with the physical stores. Target, Wal-Mart, Toys R Us and J.C. Penney all said they were pleased with traffic both at the stores and online for the official start of the holiday season.

J.C. Penney’s CEO Marvin Ellison said: “We saw customers going back and forth, researching online and then go to the stores.” And Wal-Mart’s Steve Bratspies, chief merchandising officer, said the chain saw more shoppers going back forth between its website and its stores compared with a year.

But sometimes retailers lose when customers go online. Ashley Walton got out early to go to stores on Black Friday, but she left disappointed. She said Wal-Mart didn’t have the tablet she wanted for her son.

She solved that quickly by ordering it on Amazon.com.

No One Is in a Rush

William Taubman, chief operating officer at Taubman Centers, which operates more than 20 U.S. malls, said that without a clear trend in fashion, there’s less of an urgency to buy.

For Pam Williams, the Black Friday shopping has lost a bit of its luster because there’s no rush of getting a sought-after item. “They kind of took the fun out of Black Friday when they started opening up on Thursday,” said Williams, who was shopping in Harrisburg, Pennsylvania on Friday.

Not that there aren’t any hot items. Jim Silver, editor-in-chief of TTPM, an online review site, said about 10 toys are already hard to find, including certain “Star Wars” toys. Still, there doesn’t seem to be panic right now.

That’s something Keith Nelson noticed as he stood in line on Thanksgiving, waiting for Toys R Us’ 5 p.m. open: “Lines used to be longer, people would be sleeping and bringing lounge chairs out here,” he said.

Toys R Us CEO Dave Brandon said the lines weren’t as long as last year, but the traffic built throughout the night. He declined to give specific numbers.