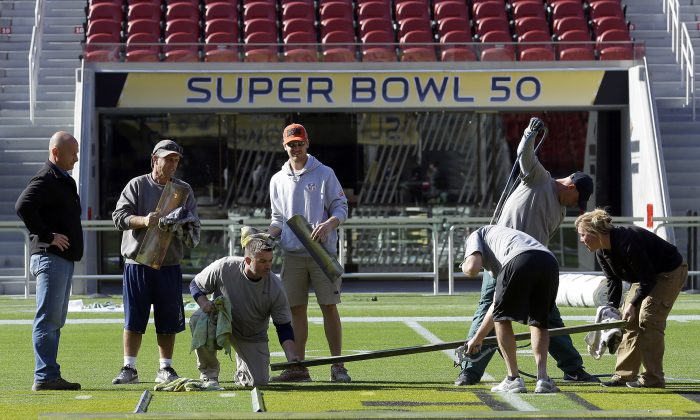 Although the Broncos logo was originally painted in both end zones, the grounds crew made the correction. (AP Photo/Ben Margot)
NFL

Not going anywhere for a while? The grounds crew for Super Bowl 50 may have needed a few Snickers bars after painting the Denver Broncos logos in both end zones at Levi’s Stadium in Santa Clara, California, according to a Sports Illustrated report. (FYI, it’s still not as bad as misspelling the Chiefs the ‘Chefs’.)

See the faint remains of ‘BRONCOS’ in the end zone? Grounds crew painted the logo on the wrong side. #SuperBowl50 pic.twitter.com/Jzy060MCzO

The Levi’s Stadium twitter feed eventually fessed up to the gaffe on Thursday Jan. 28 with this tweet:

According to CBS Sports, the grounds crew on Monday painted the visitor’s side with the Broncos logo when actually Denver is supposed to be the home team. They then tried to take it off but there was still a faint Broncos logo in the background, which can be seen here:

Fortunately for the grounds crew, the Super Bowl won’t take place until February 7, when the Broncos square off against the Carolina Panthers, giving them plenty of time to make the field perfect. If the only gaffe is the end zone situation it will have gone off more smoothly than at least one other Super Bowl.

Five years ago, newly-built Cowboys Stadium hosted Super Bowl XLV between the Green Bay Packers and the Pittsburgh Steelers. Although the game on the field went off without any hitch, the Stadium wasn’t quite ready to house the announced attendance of 103,219. The roughly 15,000 temporary seats weren’t all finished by game-time and as a result some 1,200 fans were moved to either different seats or standing only room. Some never saw the game at all.

Roughly 400 fans ended up with no seats so the NFL offered them triple the value of their $800 tickets as well as a ticket to the next year’s Super Bowl. Later, the NFL gave them a second option that included a free ticket to any future Super Bowl plus roundtrip economy airfare and four nights in a hotel room.