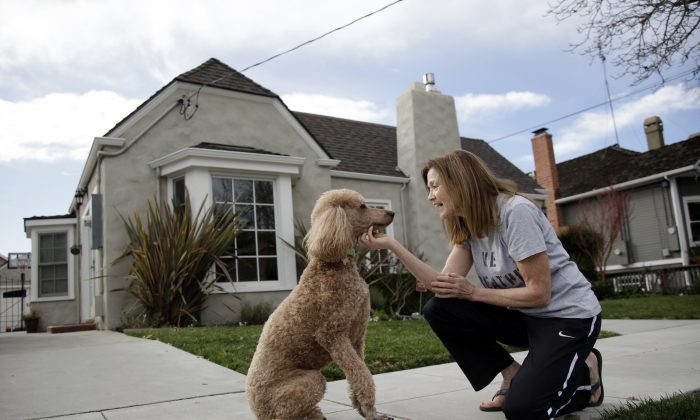 In this Friday, Jan. 15, 2016, photo, Therese Lehane poses for a photo with her dog Rudy outside her house in San Jose, Calif. Lehane is renting out two of her rooms to Super Bowl news crews. In the San Francisco Bay Area, where high rents are legend, residents looking to make a quick buck are offering their homes at super-sized prices to the 1 million visitors expected for the Super Bowl festivities. (AP Photo/Marcio Jose Sanchez)
Northern California

Residents List Rentals at Super-Sized Prices Ahead of Super Bowl

SAN FRANCISCO—In the San Francisco Bay Area, where high housing costs are notorious, residents looking to make a quick buck are offering to rent their homes at super-sized prices to the 1 million visitors expected for Super Bowl 50 festivities.

A four-bedroom apartment near San Francisco’s “Super Bowl City” is listed at $1,495 a night, with a minimum six-night stay.

And let’s not forget a cozy treehouse for two in a 150-year-old oak tree a half hour drive from downtown San Francisco. You can call out for pizza and never mind that the bathroom is down the tree. Best of all, it’s just $495 a night.

Whether customers will pay such prices is uncertain, even in an area where hotel rooms are limited for the week-long extravaganza. Of an estimated 50,000 hotel rooms in the nine-county Bay Area, the NFL has booked nearly half for players and their families, officials, and employees, according to the local bowl organizing committee.

That means regular out-of-towners are on the hook to book a place for pre-game festivities in San Francisco and the game Feb. 7 at Levi’s Stadium in Santa Clara, about 40 miles to the south, when the Denver Broncos square off against the Carolina Panthers.

In response, the number of listings on traditional home-sharing sites such as Airbnb and HomeAway has soared. According to Airbnb, demand is about three times greater than for last year’s Super Bowl in Arizona, with homes closer to the stadium listed at higher prices than units in notoriously apartment-squeezed San Francisco.

“There is definitely demand and it’s definitely a great way to generate extra income, but you can’t go overboard. You can’t gouge, because there’s such an increase in supply,” said David Ordal, chief executive officer of Everbooked, a company that provides pricing and market analytics for Airbnb.

“Unless you’re extremely close to the stadium, you shouldn’t shoot for the moon—you might walk away without a booking,” Ordal said.

Paul Arys is a homeowner who can shoot for the moon. He and his wife, Laura Hernandez, who live about a 5-minute walk away from the stadium, have listed their two-bedroom house for $2,000 a night. The usual rate is $100 a night for a bedroom, or $500 for the entire house.

No one had booked yet, but that was likely to change once the playoff teams were locked Sunday, allowing the couple to go away for the weekend.

“Probably we’re going to snowboard in Tahoe,” he said.

Super Bowl of Shopping Is More Like a Scrimmage

Judie Ciesla, an experienced host on Airbnb, recently helped Cyndi Chong and her sister list for the first time a two-bedroom home five blocks from the stadium. The house can sleep six and is priced at $700 a night, with a four-night minimum.

“It’s a no-brainer we should,” Chong said of their decision to rent out her sister’s house.

Ciesla herself is offering a room in her San Jose home for $425 a night, which she acknowledges may be too high for the space and location. But nobody really knows at this point.

“I am kind of vacillating whether I should lower it a little bit,” she said.

The people offering the treehouse, which has been booked for the day before the game, declined to be interviewed. A man offering the cottage in San Jose also declined to talk to The Associated Press. The person offering the $10,000 a night luxury home with eight beds and eight parking spots did not respond to a message requesting an interview.

A man offering the four-bedroom apartment in San Francisco would only speak anonymously because he says he and his roommates are violating the city’s short-term rental rules by renting out the apartment they lease for $4,500 a month.

He doesn’t think $1,495 a night is too much for an event like the Super Bowl.

“We’re not really doing it because we need the money,” he said. “But it’s the opportunity for supplemental income if it works out.”

One person who’s already locked in guests is first-time host Therese Lehane. She’s renting two rooms in her San Jose home for $ 1,000 a night, to four cameramen with FOX Mexico. Lehane will work as a greeter for the game.

“I just thought it would be an awesome experience,” she said. “Who gets to work the Super Bowl and then have the cameramen stay in their house?”