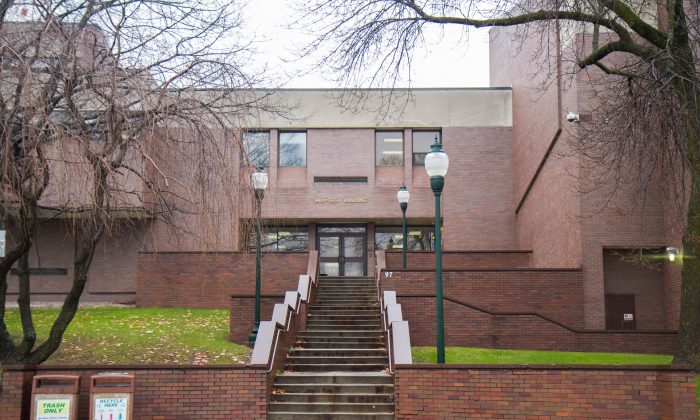 The bio-tech building where the diagnostic imaging program is housed at the Orange County Community College in Middletown on Dec. 2, 2015. (Holly Kellum/Epoch Times)
New York

MIDDLETOWN—Orange County Community College (OCCC) is trying to make amends after it removed accreditation for its radiologic technology program this May, affecting an unknown number of students without telling them.

The accreditation by the Joint Review Committee on Education in Radiologic Technology (JRCERT) was removed a little over a year early by former president Bill Richards for reasons unknown.

“It was a voluntary accreditation in the sense that it was a value-add, a mark of distinction,” said Young in a recording of the meeting provided by the county. “Students do not need this accreditation absolutely to get a job.”

It was lack of transparency and communication with the students that was problematic.

It was clear from the Nov. 16 meeting that the decision was made by former president Bill Richards at the advice of the department chair, and the college Board of Trustees was not informed. Young confirmed it would be the president’s job to bring a decision like this before the Board for them to vote on.

There was no justification given for the withdrawal of the accreditation when it was brought up in the November meeting, and the committee decided to discuss it in executive session.

County legislator Jeff Berkman (D-Middletown) said after executive session that, “it was a department chair’s decision, that this was not a worthwhile endeavor to keep the accreditation going, and the president evidently complied with that decision.”

According to minutes of committee meeting for September, which Young attended, she said, “The decision was made very much with the focus on local employers close to Orange County and the clinical sites with that experience.”

A representative for the college declined to comment pending a lawsuit.

The students most affected by the decision were the ones who graduated in August.

One possibility, is the funding.  Young was asked how much the program costs and whether or not it was a factor in the decision. “Young replied it is $6,000 and she believes in the preliminary information that she read, yes it was part of the decision to withdraw,” the September minutes read.

The cost of the initial certification was $3,675 and with an additional $1,575 to maintain it each year, according to JRCERT’s website.

The letter from JRCERT acknowledging the college’s voluntary withdrawal said only “the decision was based on the program’s prerogative to voluntarily withdraw accreditation,” and if the college wished to make any comments about its decision, to do so within 20 days. The letter says the comments would be posted on the JRCERT website; as of Dec. 2, there were no comments from the college.

Once Young and the Board of Trustees found out, they set about contacting the students who were affected, Young said. They also came before the Committee in September, about three weeks after the college became aware of the problem, to let them know what happened.

In the minutes for the September committee meeting, Young said there were 20 graduates of the 2015 program and between 20 and 25 in the class for 2016.

The accreditation ended on May 21 of this year, so the students most affected by the decision were the ones who graduated in August.

Young said they have been communicating with them “every way we knew how” to let them know that the certification is not a requirement to be hired in the state (it is only required in the state of Maryland) and that the 10 regional clinical sites that cooperate with the college do not consider it a criteria to be hired.

The certification is not a requirement to be hired in the state.

The program was dual certified with JRCERT and the Middle States Commission of Higher Education, so the program is still certified, but it has one accreditation now instead of two.

Young also said the college has worked out a deal with the state of New Jersey to treat these students as if they had graduated from a JRCERT accredited program.

All the 2015 students passed the exam by the American Registry of Radiologic Technologists (ARRT) that is required to operate in the state, Young said.

She also said that the college has been asking for feedback from the students about obstacles they have come across as a result of the accreditation being pulled, and received little response.Except for one student who applied in the state of Maryland, the college had not received any other negative feedback as of the Nov. 16 meeting. Young said anecdotally, the college has learned that many have already found jobs.

They were considering having a job fair as a way to help these students connect with local employers, but with so little negative feedback, Young said, they thought a smaller-scale event would be more appropriate.

“Maybe as tensions cool, a more social ‘[We] care about you’ ‘Please come in’, more of a coffee [and] cookie ‘How can we help you?’ … kind of a gathering,” Young said.

Even in the September and November meetings, there was talk about litigation and the college appeared to be shoring up for a lawsuit.

“It’s not every day that the attorney has to be brought in to do a whole big investigation,” Berkman said after the executive session of the November meeting.

In the September meeting, Paul Ruszkiewicz, a legislator representing the Towns of Warwick, Minisink, and Wawayanda said three of his constituents were affected by the decision and he had met with two of them.

Damien Brady, Assistant County Attorney said some students had already been talking to attorneys at that point, according to the minutes.

And that lawsuit may have come to fruition.

That lawsuit may have come to fruition.

On Nov. 30, the college received notice of a claim that was filed on behalf of some of the 2015 graduates, said Mike Albright, a communications officer for the college.

He did not know how many students were behind the claim or what their grievances were, and declined further comment while the college sorted through the claim.

The class of 2016 may also be affected by the lack of accreditation. When they entered into the program, it was under the assumption that the JRCERT accreditation was still current.

Young said the college is working on getting the accreditation back as soon as possible, but much of the process relies on the accrediting body so the college does not have a lot of control.

“We are doing everything in our power to work with them,” Young said.

The college is working on getting the accreditation back as soon as possible.

JRCERT has the OCCC on their list of programs to be reviewed in 2015, with the date set for July.

The college has been communicating with the students via mail and email about the progress of the re-accreditation, and “they are as informed as they could possibly be in this process,” Young said.

“[We are] moving in the right direction of a very bad situation.”

Legislators expressed concern and surprise at the lack of transparency by the former president and called for greater oversight in the future.

“I don’t want to say it is astonishing but it is certainly disconcerting, dismaying that the board of OCCC would be completely out of the loop on this issue,” Berkman said.

I don’t want to say it is astonishing but it is certainly disconcerting.
— Jeff Berkman, Orange County Legislator

He called for a report to be made after the aforementioned investigation by the county attorney that would be presented to the College Board of Trustees.

Other legislators asked about checks and balances to prevent something like this from happening again.

“The Board expects the president to bring all new accreditations and withdrawals of accreditation to the Board from here on out,” Young replied.

Updates were made on Dec. 4 with information from the September Education and Economic Development Committee meeting.