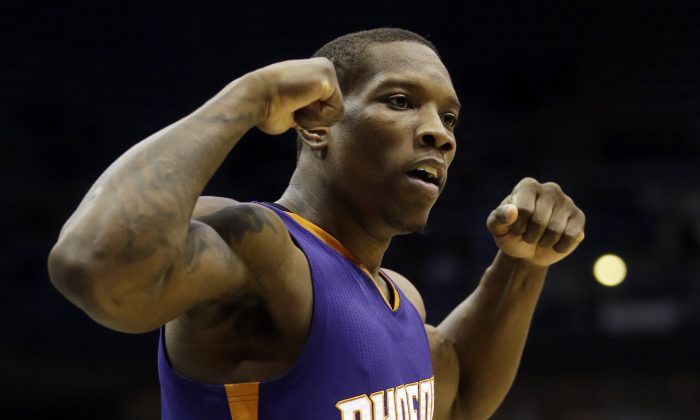 Phoenix Suns' Eric Bledsoe reacts after making a basket and being fouled during the second half of an NBA basketball game against the Milwaukee Bucks Tuesday, Jan. 6, 2015, in Milwaukee. The Suns won 102-96. (AP Photo/Morry Gash)
NBA

The Phoenix Suns traded Goran Dragic away just prior to the NBA trade deadline, but the team’s general manager disputed the notion that the Suns are now without their best player.

The Suns then sent a first-round pick, Tyler Ennis, and Miles Plumlee out and received Brandon Knight, a point guard that coach Jeff Hornacek will pair with Bledsoe to replace Dragic and Thomas.

McDonough and Suns president Lon Babby expressed disappointment at Dragic’s comments made before the deadline. Dragic said he didn’t trust the Suns front office after his agent informed them that his client wouldn’t re-sign with them in the offseason, when he’ll be an unrestricted free agent.

Babby called the comments “unfair and unwarranted aspersions,” and also didn’t apologize for bringing in Bledsoe and Thomas, which took the ball out of Dragic’s hands a lot. “If some of those moves ruffle Goran’s feathers, so be it,” he said, reported Paul Coro of the Arizona Republic.

“Sometimes, players gets a little selfish and are more worried about I, me and my than us, our and we,” added McDonough, who said signing Thomas during the offseason was not a mistake. “He played well and we played well,” he said, noting that the two-point guard system has proven to work but requires buy-in.


The Suns will now try to keep in the race for the eighth spot in the Western Conference, despite losing three rotation players and getting back two. The Oklahoma City Thunder, Phoenix’s primary competition for the spot, made a series of upgrades, including snagging Enes Kanter for their backup center and D.J. Augustin for their backup point guard.

The Suns’ new additions, meanwhile, could play as early as Saturday night versus the Chicago Bulls.