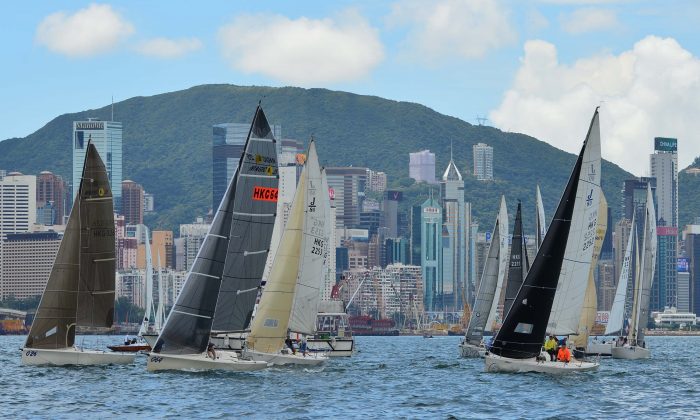 Sportsboats and J80’s set off on the 1st race of day 2 (Sunday Sept 11) of the RHKYC 2016 Autumn Regatta in Victoria Harbour, Regatta winner in the Class R2B2 is leading the way followed by the regatta No 2 boat Merlin. (Bill Cox/Epoch Times)
HK Sports

HONG KONG—The Royal Hong Kong Yacht Club’s 3-race, 2-day Opening Regatta ended up being a 2-race, 1-day event after racing was called off after only 3 Classes had started on a wet but windless day in Victoria Harbour, on Saturday Sept 10.

Sunday Sept 11 turned out to be more obliging with sunshine and breezes ranging from 4 to 6 Knots. A total of 75 boats from 11 classes. The first race was kept short, with the 2nd races commencing quickly after all boats in a class had finished. With wind increasing slightly as that day progressed race officer Barry Truhol was able to set slightly longer race distances for the 2nd race.

With an early finish, crews were seen chatting and enjoying the late afternoon sunshine on their boats tied alongside the Eastern pontoon before changing for the prize giving in the early evening.