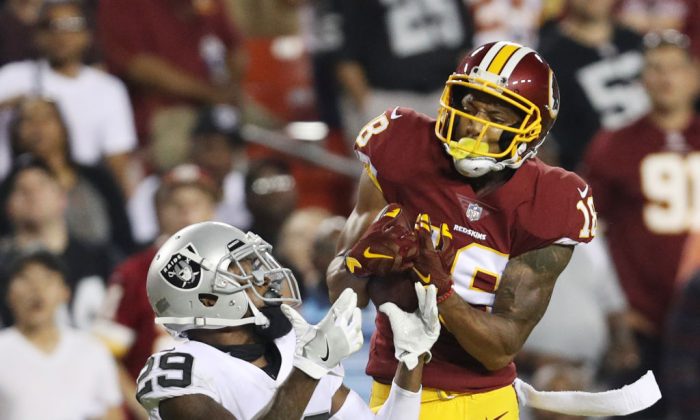 Wide receiver Josh Doctson #18 of the Washington Redskins makes a catch over cornerback David Amerson #29 of the Oakland Raiders in the third quarter at FedExField on September 24, 2017 in Landover, Maryland (Patrick Smith/Getty Images)
Entertainment News

The ratings are in for NBC’s “Sunday Night Football” amid anthem protests and President Trump’s comments.

“Many people booed the players who kneeled yesterday (which was a small percentage of total). These are fans who demand respect for our Flag,” Trump said in a Tweet on Monday morning. “Wouldn’t you love to see one of these NFL owners, when somebody disrespects our flag, to say, ‘Get that son of a [expletive] off the field right now,” Trump said a rally in Alabama over the weekend. “Out! He’s fired. He’s fired!’”

According to Deadline, the ratings for “Sunday Night Football,” which saw the Oakland Raiders play the Washington Redskins, dropped 11 percent from last season’s Week 3 matchup, which saw the Chicago Bears play the Dallas Cowboys. This Sunday’s Redskins-Raiders game averaged an 11.6 Nielsen rating, which means 11.6 percent of households tuned in for the game. The ratings are also an 8 percent drop from last week’s “SNF” game between the Green Bay Packers and the Atlanta Falcons.

NBC also confirmed the 11.6 “SNF” rating to Reuters, saying it was lower than last year’s Week 3 ratings, when 12.9 percent of households watched the Bears-Cowboys game.

Fox’s afternoon game, which saw the Seattle Seahawks play the Tennessee Titans, also saw a decline of 16 percentage points from last year, according to Deadline. Neither the Seahawks, nor the Titans showed up on the sideline for the anthem.

There’s been much speculation as to why the NFL’s TV ratings have been sliding since last season.

During the 2016 season, TV ratings saw an 9 percent decline during the regular season and 6 percent during the playoffs, according to Re/Code. In a report last week from The Hollywood Reporter, Wall Street is starting to “take notice” of the slumping ratings. If the slide continues, CBS, ESPN, Fox, and NBC could see losses of $200 million in revenue.

But now, the ratings could slide down even further after President Trump’s comments combined with the protests during the national anthem over the weekend.

In the first week of the 2017 season, the league saw a 12 percent drop in TV ratings, and that followed by a 15 percent drop in week two, reported Business Insider, citing Nielsen.

A number of NFL team owners attempted to rebut Trump’s comments over the weekend. Meanwhile, more than 200 players protested during Sunday’s Week 3 games, following the path set out by ex-San Francisco 49ers quarterback Colin Kaepernick, who said he was protesting against police brutality and racial injustice.

Last season, a common explanation for the drop in ratings from executives was there was an unprecedented interest in the U.S. presidential election. Some polls, however, found that the protests during the national anthem were a primary factor in declining viewership.

A JD Power survey, according to ESPN, discovered that “anthem protests were the top reason that NFL fans watched fewer games last season.”

“Twenty-six percent of those who watched fewer games last season said that national anthem protests, some of which were led by Colin Kaepernick, were the reason,” ESPN said, citing the survey.

On Sunday, amid the protests, some fans were incensed, with many setting their team memorabilia on fire in viral videos while stating they’ll never watch another NFL game again.