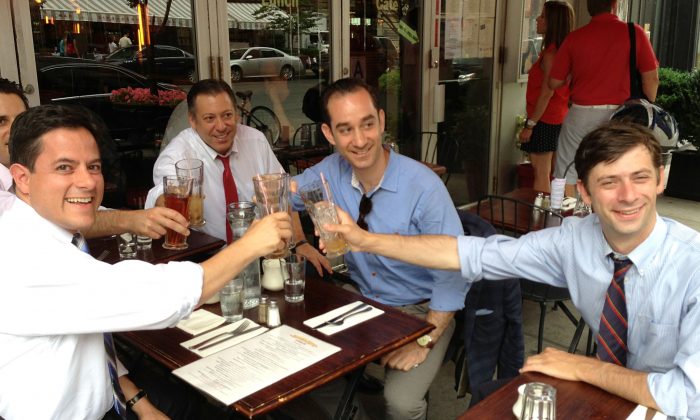 Sidewalk Brunch at 10 a.m. on Sunday? Now Legal in NYC.

NEW YORK—If you’ve ever had brunch before noon at a sidewalk cafe in New York City, the restaurant serving you broke the law. And chances are the business owner had no idea.

It turns out an archaic city law prohibits sidewalk cafes from operating before noon on Sundays.

But some restaurants have been fined for doing just the same.

Council member Steve Levin said that he first heard about the regulation when restaurant owners in his district complained about the fines. These fines range from $200 to $1,000, and businesses risk losing their sidewalk cafe licenses after repeated violations.

To protect business owners from fines, Levin and Council member Dan Garodnick proposed a bill to allow sidewalk cafes to open at 10 a.m. on Sundays. The two sat down for brunch at Edward’s Cafe in Lower Manhattan on June 26 to celebrate the bill’s imminent passage.

“It’s a relic of a law,” commented Garodnick.

Andrew Rigie, the executive director of the NYC Hospitality Alliance, said that two hours on Sunday mornings are critical to the bottom lines of small businesses.

“I really think it just adds to the whole culture and landscape of New York City,” Rigie added.

Residents of some Brooklyn neighborhoods complained last year that cafes were opening before noon and that their operations were cluttering sidewalks while residents tried to get to church. Lawmakers have said there’s room for both churchgoers and brunchers in the Big Apple.

Restaurants pay thousands of dollars every year to operate sidewalk cafes. The prices vary depending on the location, the number of seats, and other factors.

Under current law, sidewalk cafes can open at 8 a.m. every day of the week except Sunday.