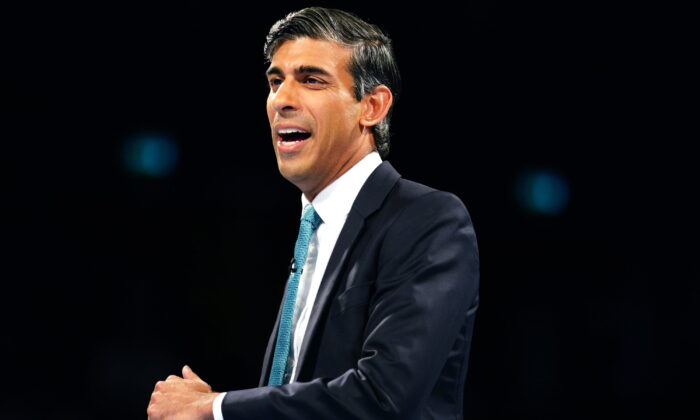 Rishi Sunak during a hustings event in Cheltenham, England, as part of the campaign to be leader of the Conservative Party and the next prime minister, on Aug. 11, 2022. (Ben Birchall/PA Media)
UK

In the leadership race for the Conservative party, Rishi Sunak has stepped up his promises to tackle the cost-of-living crisis as he tries the close in on rival Liz Truss.

Sunak said on Thursday that he will use the “tried-and-tested” welfare system to give targeted support on top of the VAT cut he previously promised.

It comes as energy consultancy Auxilione’s forecasted bill costs kept ballooning by day, with a new estimate on Friday saying the price cap on annual energy bill could reach £3,628 in October, £4,538 in January, and peak at £5,277 in April, 168 percent higher than the current cost.

Sunak said his plan to reduce VAT on energy bills is expected to cut £200 from every household’s bills.

The former chancellor previously announced a £650 payment to low-income households, £300 to pensioner households and £150 to disabled people, along with a 25 percent windfall tax on the profit of energy firms to fund the package.

He promised more payments “using those same channels, including the winter fuel payments and cold-weather payments.”

Sunak did not commit to a number, instead said he will confirm the “exact level of support” when finding out “precisely what the increase is” in energy bills, which is expected to be later this month when energy regular Ofcom will announce its revised cap on energy prices.

Having campaigned on tighter fiscal policy and critised Truss’s promise to cut taxes immediately as being irresponsible and inflationary, Sunak said revenue from his windfall tax on energy firms is likely to raise more revenue than expected because of the high energy prices, covering some of the expenses. Sunak also promised to “find” more money by identifying savings across the government, meaning other spending may be stopped or paused.

However, Sunak said he is also “prepared” if the situation “requires some limited and temporary, one-off borrowing as a last resort to get us through this winter,” despite having argued against borrowing throughout his campaign.

Sunak argued his promise is different from Truss’s plan to reverse the rise in national insurance and to ditch the planned increase on corporation tax, saying, “Borrowing relatively small sums temporarily in the throes of a crisis to provide targeted support is good, Conservative government. Borrowing permanently for large, unfunded, inflationary spending commitments is a flight of fancy.”

Truss has promised to reverse the 1.25 percent rise in national insurance if she becomes the prime minister. She also said she will temporarily suspend the green energy levy, which is estimated to cut £150 from bills.

The foreign secretary previously said the way to help with the rising energy bills is “a Conservative way of lowering the tax burden, not giving out handouts,” but her campaign later denied that Truss was ruling out direct support.