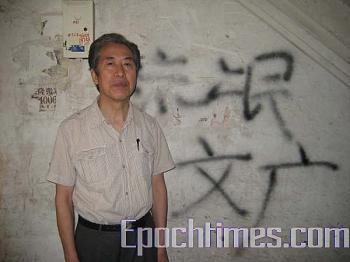 Professor Sun Wenquang, standing in front of the wall of his apartment building in Shandong University. The wall was painted with insulting words like “traitor,” “rapist Sun Wenquang,” “rougue Sun Wenguang,” and “rogue Sun,” etc. on June 2 (The Epoch Times)
China

By Wang Meiling
Print
Because of his views for a democratic reform in China, retired university professor, Sun Wenguang, has been continuously suppressed by the regime. Now, he sits in a hospital bed after several unknown persons attacked and beat him publicly.

On the morning of April 4, retired Shandong University professor, Sun Wenguang, was followed by police, and later beaten by several unknown persons publicly. The attack resulted in three broken ribs. Sun has been admitted into hospital and is still under intensive care in Qilu Hospital, Jinan City.

On the evening of April 5, the 75 year old told an Epoch Times reporter in a phone interview, “I was beaten and am now in hospital … A few police officers followed me when I left the University on the morning of April 4, then several others pushed me down a two meter high hill and beat me in the park.”

Sun also confirmed, “They broke three of my ribs. It’s so painful. I haven’t slept for 36 hours. I can only lie in bed in one position.”

According to Sun, he cannot figure out the backgrounds of the 5-6 people who beat him, because they didn’t say a word. They were very strong and around 30 years old.

“Some passersby saw the scene and called the local police. The director of the police station came, so the people who beat me ran away,” said Sun, adding that the beating lasted over 10 minutes.

Sun has been suppressed by the regime in the past over his views of a democratic reform in China, and his daring speeches. The university had also ceased his retirement pension over the past four months.

Sun told the Epoch Times reporter that his friend, Zhang Xingwu, a professor at the Institute of Education in Jinan city, was illegally detained for practicing Falun Gong. Sun had appealed for Zhang and called for freedom of belief and the justice of judicature.