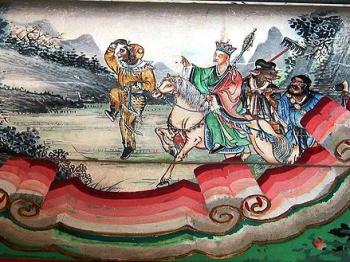 Photograph of painting depicting a scene from the Chinese classic Journey to the West. The painting shows the four heros of the story, left to right: Sun Wukong, Xuanzang, Zhu Wuneng, and Sha Wujing. (Wikimedia Commons)
China

Sun Shines on Legendary Rock Only Every 60 Years

Epoch Times Staff
View profile
Follow
biggersmaller
Print
The large rock known as “the rock for drying scriptures in the sun” lies in the valley behind the Fahua Temple, in Anning City, in China's southwestern province of Yunnan. Ancient characters are carved on its surface, but the most remarkable thing about this rock is that the sun is said to shine on it only once every 60 years.

Legend has it that when the monk Xuanzang (A.D. 602–664) was on his way back to Chang'an, the capital of the Tang Dynasty, from India after receiving the Buddhist scriptures, he dried the scriptures on the rock after dropping them in the river.

Yunnan Information Newspaper reports that this rock is over a dozen yards high and several yards wide at the base. Trees and grass grow densely around it. The peculiar thing is that when the sun is high in the sky, casting sunlight to every corner of the valley, this rock does not get a single ray of sunshine.

On the front of the rock, it appears to have ancient characters chiseled on a 9-foot-by-6 foot flat surface. There are eight lines of characters, each having about a dozen carved characters. These curly-shaped characters look like hieroglyphic symbols or pre-Chin Dynasty characters, which are still used on seals today.

Over the ages, the characters have become hard to recognize. Besides these eight lines of large characters, there are many more finely carved characters that cannot be read.

Mr. Cao, a scholar in Chinese history, culture, and geography, said: “The sun shines on the rock only once every 60 years. It happens after sunset when the sun rises from behind the mountains [the same evening].”

Mr. Cao learned from elderly people in a village near the rock that a woodsman goes into the mountains to gather firewood every day. By sunset, he passes the rock on his way home while carrying two bundles of firewood. One evening, when the woodsman passed the rock, he saw the sun rise again after sunset on the same day. Bright light illuminated the rock. Startled, he dropped his bundles of wood and raced to the village to tell others.

A monk at the Fahua Temple says, “It was around 6:00 p.m. at the time of the 2005 spring equinox (March 20, 2005). I saw the sun illuminate the rock for about half an hour.” He had been a monk at the temple for many years, but that was the only time he had seen sunshine on the rock.

According to the Archives of Anning Prefecture, “It was during the rainy season, and the temple was rather dim as usual. Suddenly, sunshine filled the hall. The beards and hair on the Buddha portraits on the walls became incredibly vivid. Shortly afterward, the sunshine was gone, and everything became dim again.”

This was reported in 1921. Local legend has it that on the day after the spring equinox, once every 60 years, the sun rises again after sunset on the same evening. Sunshine fills the mountaintops and the valley, illuminating the special rock. The forests become vivid in color, Buddha portraits radiate a golden color, and the temple hall is filled with brilliant rays of light.

It is said that Xuanzang dropped the Buddhist scriptures in the Sha River when he encountered water monsters while crossing the river on his way back to the Tang capital from India. He rescued the scriptures from the water and needed to dry them.

The monk and his escorts opened the scriptures on a rock and lit a fire to dry the scriptures, but suddenly the sun rose even though it was nightfall. The sunlight lit up the night sky and rock, drying the scriptures.