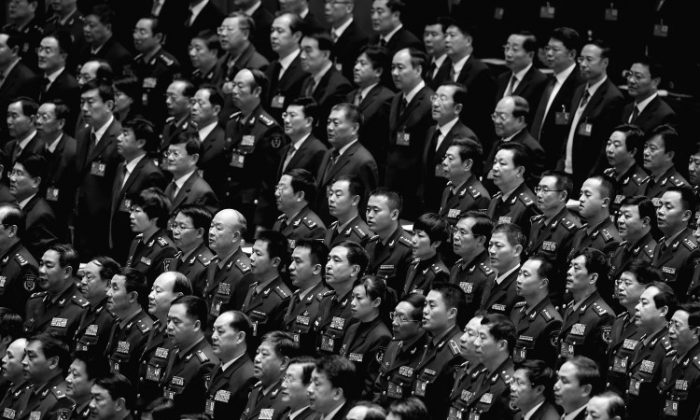 Delegates attend the opening session of the 18th Communist Party Congress held at the Great Hall of the People on Nov. 8, 2021, in Beijing, China. Many Party officials have found themselves wiretapped recently, as paranoia in the ranks increases amidst an anti-corruption campaign led from the top. (Feng Li/Getty Images)
Analysis

Sun was under investigation by the National Supervisory Commission, the regime’s anti-corruption watchdog, in April 2020.

While accepting bribes is a typical charge for corrupt officials, the market manipulation and illegal possession of firearms charges are rare and even unheard of.

Yuan Hongbing, a Chinese political analyst and law scholar, gives the inside story behind these charges.

Previously, few corrupt officials, the so-called tigers, were charged with insider trading or leaking trade secrets, known in China as the “crimes of undermining the order of financial management.” The “market manipulation” charge is new for the sacked tigers.

Yuan believes the market manipulation refers to the financial coup that Chinese billionaire Xiao Jianhua carried out over six years ago.

In 2017, the state mouthpiece CCTV publicized that the abrupt up and down of the 2015 stock market was a “crime of financial manipulation.” Xiao was believed to be the front man of this market manipulation.

Then, Xiao disappeared in early 2017. He was believed to have been abducted from his Hong Kong residence and taken back to the mainland.

Yuan told the Chinese edition of The Epoch Times that the 2015 stock crash was indeed a financial coup, and “Xiao was the man behind the scene.”

He said it was meant to warn Xi Jinping that his anti-corruption campaign should not go too far. Xiao wanted to secure the interests of the princelings and the elite, in particular, the faction of former Party leader Jiang Zemin.

“I was in Taiwan. Xiao had someone come and see me. I warned him that he should stay in a safe place if he wanted to do it. But he thought Hong Kong was safe enough, and he had guards to protect him. I told him it was a mistake. But he did not listen,” Yuan said, that was before 2015.

Xiao was admitted as a law school student at Peking University in 1986, when Yuan was a faculty member, and director of that year’s law student body. They became acquaintances and stayed in touch.

Yuan said that Xiao had many connections within the Party and the government. Sun was his connection in public security. But Sun was not the main player in the stock crash.

Sun was involved only because it’s believed that the stationing of public security would help to better control the stock market. Yuan said, “My understanding is that the charge of ‘market manipulation’ was based on what Xiao confessed [to].”

After his disappearance, Chinese media revealed that he worked hard to cooperate with the authorities to reduce the penalty of his “crimes.”

Arsenal of Guns, Enough for a Platoon

In Sept. 2021, the regime accused Sun of “political ambitions” and “gang activities” that “seriously endangered political security.” This was interpreted as he was involved in a coup.

Yuan had a different take on the charges. He believes it was a territorial fight between Sun and Wang Xiaohong, the incumbent party secretary and deputy minister of Public Security, and a confidant of Xi Jinping.

Yuan said, after Meng Hongwei, former vice minister of Public Security and Interpol president, was sacked in 2018, “Sun felt he had seniority in public security.” But, Xi promoted Wang Xiaohong.

“Sun’s political ambitions would be to get rid of Wang and to become the minister of Public Security,” Yuan said.

Among the charges Chinese media revealed in 2020, was that Sun “secretly stashed a large number of classified documents.” Among them included secrets of the origins of the pandemic that were kept by his wife in Australia, some of the Chinese media reported.

Yuan said that in fact, those documents were hidden by Sun’s overseas “white gloves.”

Yuan Hongbin, took political asylum in Australia in 2004. His concern about Chinese democracy had him visit Taiwan often starting in 2005. In several lectures he gave in Taiwan, Yuan tried to warn Taiwan about the infiltration of the Party.

According to Yuan, Sun was worried about his own safety and that’s why his messenger contacted him. Yuan agreed to meet with the messenger because he wanted to persuade Sun to rebel.

It took 17 months for the regime to expel Sun from the Party and remove him from the official post—a disciplinary punishment for Party members—after the authorities announced the investigation against Sun. Yuan considers this length of time as rare, suggesting that the Party wasn’t able to locate the classified documents Sun kept with his overseas confidants.

However, Sun’s overseas buddies all have their families in China whom they’ll worry about. “They rarely have any political aspirations,” Yuan added, therefore, they won’t necessarily expose the documents and thereby risk their families’ wellbeing.

Yuan believes the Sun Lijun drama will initiate an open and bloody struggle between Xi Jinping and the faction of former Party leader Jiang Zemin in the new year.