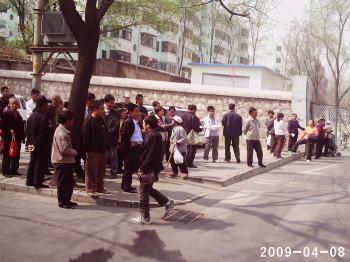 Petitioners gather at the gate of Peking University to protest Sun Dongdong. (The Epoch Times)
China

By Yue Yun
Print
TAIPEI—“99% of the petitioners are mentally ill,” remarked Sun Dongdong, a law professor at Peking University. Comments such as these have outraged a vast number of people who have not been satisfied with their local legal systems and have thus come to Beijing to petition the government and seek justice.

Yuan Hongbing, a former coworker of Sun in the university’s Law Department, said, “Sun was once a strong supporter of the Tiananmen Square pro-democracy movement in 1989. But now, he’s actually defending the communist regime. It was agonizing to hear his comments.”

Yuan said that the extremely pervasive corruption and injustice in all levels of China’s government is the direct cause for the existence of the large petitioner group. “The truth is,” Yuan said, “the corrupt officials, who abuse their powers and inhumanely exploit ordinary people, are the real crazy people in China. If anyone is mentally ill, it is these officials, not the petitioners.”

Yuan said the fact that a well-educated intellectual like Sun Dongdong would insult these petitioners and defend the government is a tragedy of modern China. He attributed such phenomena partly to the communist regime’s policy after the Tiananmen Massacre.

“After the June 4, 1989 Tiananmen Square Massacre, Deng Xiaoping realized  he had committed a crime against humanity,” he said. “Like most perpetrators, his first action was to cover it up. So he tried to blind Chinese people’s conscience with material desires. People won’t remember the past crime.”

“It seems that his goal has been achieved,” Yuan continued.  “People like Sun have been degraded to the point that they now defend tyranny and dictatorship. It is a tragedy for the entire Chinese intellectual community.”

“Sun’s speech reflects the fact that the powerful, the greedy, and tarnished intellectuals have unified to exploit the lower classes,” Yuan said heavily. “When China is free again one day, those who ganged up with the corrupt regime will be the most despised people in the country.”