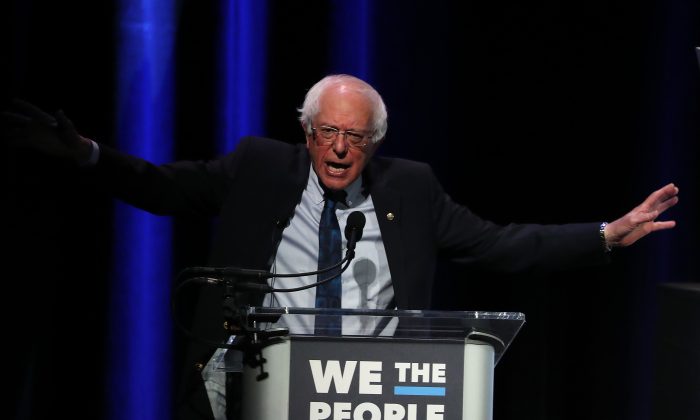 Sen. Bernie Sanders (I-VT) speaks during the “We the People" summit featuring 2020 presidential candidates, at the Warner Theatre on April 1, 2019 in Washington. (Mark Wilson/Getty Images)
2020 Election

A summit starring eight prominent 2020 Democrat presidential candidates on April 1 featured a chant repeating the words of an unrepentant Marxist. She remains a convicted fugitive for killing a state trooper.

Less than half an hour into the We the People conference in Washington, Jamal Watkins, the vice president of civic engagement at the NAACP, told the crowd to repeat after him as he recited the words of Assata Shakur, also known as Joanne Chesimard.

Shakur was convicted in 1973 of killing a New Jersey state trooper. She escaped prison and fled to communist Cuba, where she was granted asylum. Shakur remains on the FBI’s list of most wanted fugitives.

“I’m going to actually have you participate with me in repeating some words from a leader by the name of Assata Shakur. So if you could stand up—if you can’t stand, it’s OK—but I want you to repeat after me,” Watkins said.

Watkins then said several sentences by Shakur, stopping several times to let the audience repeat after him.

After the initial chant, Watkins called on the audience to “take it as loud as we can get it.” He then shouted Shakur’s words as the energized audience chanted back.

The last sentence of the chant is itself an adaptation of a line from “The Communist Manifesto” by Karl Marx and Frederick Engels.

“The proletarians have nothing to lose but their chains. They have a world to win. Proletarians of All Countries, Unite!” it states.

A number of prominent Democrats have embraced Shakur, despite her murder conviction, flight from prison, association with a communist regime, and Marxist ideology. In 1998, Rep. Maxine Waters (D-Calif.) wrote to then-Cuban President Fidel Castro to apologize for voting for a resolution urging the communist leader to extradite Shakur and other fugitives. Sanders, who was then a representative, voted in favor of the extradition.

Former Vice President Joe Biden did not attend the summit. Biden has told supporters he plans to run for president but has not officially announced his candidacy. He leads the Democratic field in early polling. Sanders, Harris, and O’Rourke are in second, third, and fourth place respectively, according to an average of polls maintained by Real Clear Politics.

Shakur was a member of the Black Liberation Army, a communist front group formed as an offshoot of the Black Panther Party. The group engaged in an armed conflict with the U.S. government through acts like robbing banks and killing police officers.

Between 1970 and 1971, Shakur was charged with several crimes and was the subject of a manhunt across multiple states. She was wounded in a shootout, arrested, and eventually sentenced to life in prison for the murder of New Jersey State Trooper Werner Foerster.

While serving her life sentence, Shakur escaped prison in 1984 and was granted asylum in Cuba. She is on the FBI’s most wanted list under the name Joanne Deborah Chesimard.

In Cuba, Shakur praised communist dictator Castro as a “hero.”