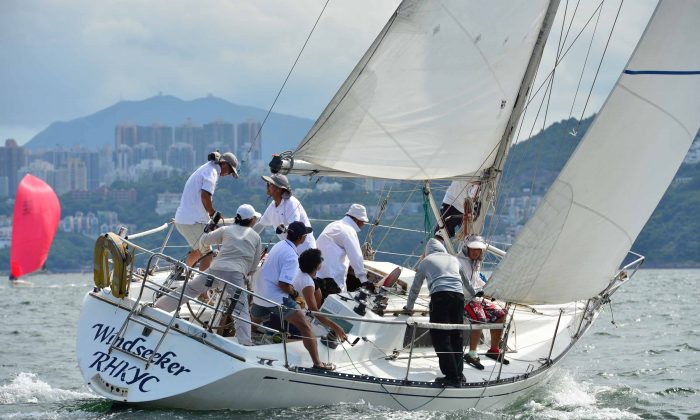 Race Officer, Gerry Daughton, decided to deviate from the normal sausage course for Races-8 and 9 and set a three-circuit, triangle, sausage, triangle route for the IRC boats and Sports Boats. He used the same course for the HKPN and Dragon fleets, but restricted the race to two circuits (triangle, sausage). Due to time shortage and a thunder storm in the vicinity Race-9 was shortened to two laps for all boats.

To make the skippers work a bit harder and make the racing even more interesting Daughton set the triangle offset mark at an 80 inclusive angle to the Windward and Leeward marks, instead of the more normal 90 degree angle.

This being the 7th actual race of the series as Races-6 and 7 were cancelled due to lack of wind, only one discard was allowed.

IRC
In the IRC Division “Lighthorse” was the star of the Day winning Line Honours and on Corrected Time in both races. “Talkinghead” came 2nd in Race-8 followed by Impalas “Moll” and “Taxi”. In Race-9 “Talkinghead” dropped down to 4th place with “Taxi” taking 2nd and Moll 3rd. In Series terms “Talkinghead” (12 points) maintained her winning position, Taxi (17) took 2nd place and “Lighthorse” (18) moved into 3rd place just ahead of “Moll” (19).

The BH36, “Talkinghead” performed well all series and never dropped below 4th place in all of the Races. “Taxi” beat her perennial Impala rival “Moll” by 2-points in the series. The Beneteau First 50, “Lighthorse” with her Shenzhen team is becoming increasingly competitive.

Winner of the Sports Boat series Steve Bourne commented on the triangular course: “The triangular course is good for handicaps [IRC and HKPN] as they are based upon a doing a circle… so boats with Gennakers can perform properly to their rating.

“For the Magics it is both exciting and technically difficult as we spent most of the reaching leg climbing in the lighter winds to get up to the mark and then bearing off like crazy in the gusts!

“I know that both the main and jib were flapping for most of the leg! But it was so much fun if a little hairy and we were doing 14+ knots!”

HKPN
Flying Tiger 10, “Kiasu” was the quickest boat in the HKPN fleet claiming line honours in both races but on corrected time was placed 6th and 8th in the two races respectively.

“Ichiban”, a Beneteau First 405, relished the conditions and performed well to handicap finishing 1st on corrected time in both races pushing her into 3rd place overall in the series. “Tara” (Farr 36) made a great effort in Race-8 (first race of the day) to take 2nd place but dropped to 6th place in Race-9. But “Windseeker” (S&S 36) with a 3 rd place and 7th place in the two races respectively (the latter of which she discarded) held on to win the series.

Dragon boats
“Zephyr” finished 3rd in Race-8 and 1st in Race-9 to complete a resounding victory in the Dragon Class series.

In the 7-Races completed “Zephyr” won all but two races and finished 3rd in the other two to set her up for a series win on 8-points. Second place in the series was taken by “Eaux Vives” on 13 points while “Maiden Hong Kong” with 23 points finished the series in 3rd place.

In the final day’s races “Eaux Vives” won Race-8 ahead of “Wyuna” and came 2nd behind “Zephyr” in Race-9.

Next Race
The Hebe Haven Typhoon Series continues this coming Sunday Aug 17 with an Islands Race.