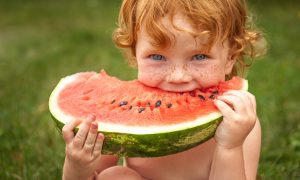 You Can’t Eat Sunscreen, but These Foods Could Have Same Effect
0 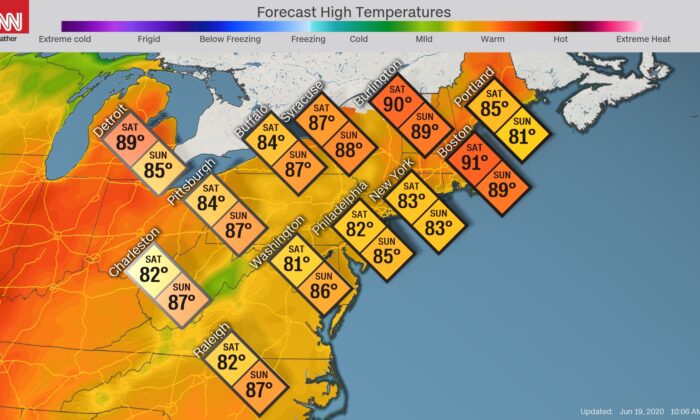 Many cities in the Northeast have been dealing with heat the past few days. Boston, Burlington, Vermont, and Caribou, Maine, will all see highs in the 90s on Sat., June 20, 2020. (CNN weather)
US News

Summer Officially Starts Saturday and the Heat Is Settling In

Summer officially starts on June 20 this year. But it’s not just hot weather that’s in the forecast. Some parts of the United States will see rain showers, strong winds, and even hail.

Many cities in the Northeast have been dealing with heat the past few days. Boston, Burlington, Vermont, and Caribou, Maine, will all see highs in the 90s on Saturday.

For other areas, the rain will be the focus. New York, Philadelphia, and Baltimore all have scattered showers and even some thunderstorms in the forecast on both Saturday and Sunday.

Severe Storms are Likely Across Parts of Midwest

In the Midwest, a slow-moving front stretching from Wisconsin to Texas will bring rain and even a few strong thunderstorms this weekend.

For some areas of Texas, Kansas, Missouri, and Oklahoma, severe weather will be possible both Saturday and Sunday. The main threats will be damaging winds and hail.

Ahead of the front temperatures will be hot. Detroit, Indianapolis, and St. Louis will all reach the low 90s on Saturday.

Behind the front temperatures will be quite milder. Minneapolis, Des Moines, Iowa, Omaha, Nebraska, and Sioux Falls, South Dakota, will have temperatures of around 10 degrees below normal on Saturday.

The first day of summer will feel like it for much of the South. Cities like Nashville, Birmingham, Alabama, and Tallahassee, Florida, are just some of the places that will be looking at high temperatures in the 90s this weekend. Atlanta will be close, but if they do hit 90 degrees, it will be the first time so far this year. Their average first 90-degree day is May 31.

Other areas will be dealing with scattered showers and thunderstorms. Columbia, South Carolina, Raleigh, North Carolina, and Miami all have rain in the forecast both days this weekend.

Sweltering Heat as Wildfires Rage Across Portions of the West

For the Northwest, the weekend will start off a little cooler than average. Seattle, Spokane, Washington, and Portland, Oregon, will all see temperatures about 5-10 degrees below normal. This is just temporary, though, as temperatures will get back to average Sunday into Monday.

The Southwest, however, will continue to see scorching temperatures. Cities like Las Vegas, Phoenix, and Tucson, Arizona, will see high temperatures in the triple digits this weekend. Unfortunately, all three cities will see the heat intensify into next week.

Multiple states across the Southwest are battling massive wildfires, with the most significant outside of Phoenix that is more than 100,000 acres. Other large fires are near Tucson and the Grand Canyon. Conditions will still be hot and dry across this region with no rain in the short-term forecast. Still, the fire weather conditions aren’t as widespread as it had been earlier in the week.

The CNN Wire and The Epoch Times staff contributed to this report.