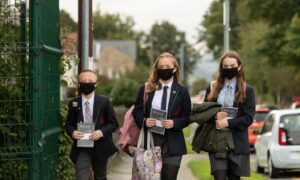 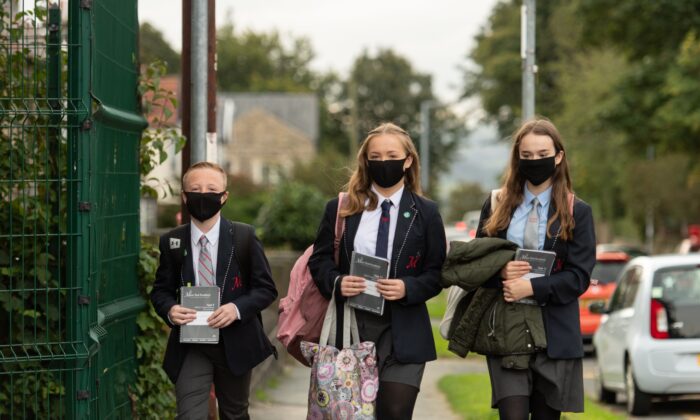 Pupils wearing facemasks as a precaution against the transmission of the CCP virus arrive to attend Moor End Academy in Huddersfield, northern England on Sept. 11, 2020. (Oli Scarff/AFP via Getty Images)
UK

The British government has announced a £700 million ($989 million) package to help pupils in England catch up on lost learning during the CCP virus pandemic, including provisions for secondary schools to offer students face-to-face lessons during the summer holidays.

Schools in England were closed for four months last year during the first CCP (Chinese Communist Party) virus lockdown, and have been closed again from the beginning of this year. Pupils will not return to school until March 8 under the government’s COVID-19 lockdown exit plan.

When schools re-open on 8 March, I want to make sure no child is left behind as a result of the learning they have lost over the past year.

A new £700m package of catch-up funding will help teachers support their pupils as they return to the classroom.https://t.co/SX37ryPipF

“Teachers and parents have done a heroic job with home schooling, but we know the classroom is the best place for our children to be,” Prime Minister Boris Johnson said on Wednesday when announcing the new catch-up package.

“When schools reopen and face-to-face education resumes on March 8, our next priority will be ensuring no child is left behind as a result of the learning they have lost over the past year.

“This extensive programme of catch-up funding will equip teachers with the tools and resources they need to support their pupils, and give children the opportunities they deserve to learn and fulfil their potential,” he said in a statement.

The new package is aimed at expanding one-to-one and small group tutoring programmes, supporting disadvantaged children, and offering summer provision for those pupils who need it the most.

“This is not adequate and will not make up for the learning and time with friends that children have lost,” said Kate Green, Labour’s shadow education secretary.

She said the package “amounts to just 43p ($0.61) per day for each child” and is less than what the government spent on last summer’s Eat Out to Help Out scheme, which was intended to support pubs and restaurants after the first national lockdown.

Paul Whiteman, general secretary of the National Association of Head Teachers (NAHT), called the government’s package “a welcome provision of funding and resources.”

But he said while summer schools are of value for some pupils, “it will be important not to overwhelm students,” as “recovery cannot happen in a single summer.”

Geoff Barton, general secretary of the Association of School and College Leaders, also welcomed the package.

But he expressed frustration that the funding had been “salami-sliced to such an extent that it may reduce its effectiveness.”

He said the total sum of the money should go directly to schools “to maximise the amount of money available to providers to spend on the approaches that work best for their pupils.”