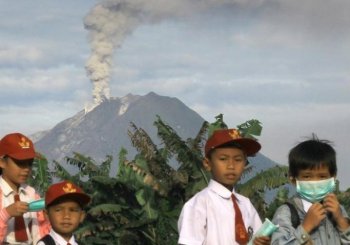 Indonesian school children walk home after schools were suspended in Tanah Karoh due to the eruption of Mount Sinabung (background) in North Sumatra on August 30, 2010. (Suntanta Aditya/AFP/Getty Images)
World

Helena Zhu
View profile
Follow
biggersmaller
Print
Mount Sinabung on the island of Sumatra erupted for the second day in a row on Monday, forcing more than 21,000 to evacuate, according to reports.

Before its initial eruption on Sunday, the 8,071-feet volcano had been dormant for more than four centuries.

The Associated Press reports that villagers residing on the slopes of the volcano have been leaving their homes to stay in emergency shelters, mosques, and churches since Friday, when the first signs of activity were observed.

Volcanic ash covered their homes and crops and clouds of ash saturated the air. Some airplanes had to be diverted due to poor visibility.

The villagers have been given food, face masks, and medicines for respiratory infections.

Indonesia comprises more than 17,500 islands. As part of the “Ring of Fire,” the country is prone to volcanic eruptions and earthquakes.