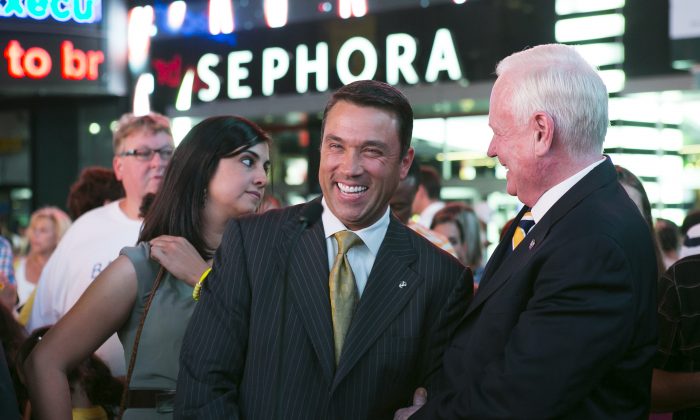 NEW YORK—In his run to unseat Staten Island Congressman Michael Grimm, Dominic Recchia has avoided a negative campaign, instead devoting the bulk of his efforts on portraying himself as a member of the borough.

Grimm, who had been the subject of a two-year federal investigation, was indicted in April with 20 counts of fraud for underreporting wages and revenues while running his Upper East Side health-food restaurant. Grimm has pled not guilty, and has adopted a silent policy on the issue, campaigning on the usual issues that would rally his base.

Recchia, a former longtime Brooklyn council member and Democrat, also speaks rarely about the the charges against Grimm, but for a different reason. He’s reckoned that bringing up Grimm’s federal indictments could backfire and push New York City’s most conservative borough to see him as an opportunistic outsider.

“[Recchia]’s just going to take advantage of what Grimm did with these fraud charges,” Black told the Epoch Times.

With few exceptions, Recchia has been courteous to the scandal-embattled Grimm, deflecting attempts by the press to bait him into attacking Grimm’s character.

“He’s still a Congress member,” Recchia told RealClearPolitics in June. “When I see him out, I say hello to him.”

Recchia can afford to play the good cop because he can count on the national Democratic establishment playing the bad cop, with it plunking down $950,000 to run TV attack ads against Grimm.

“[Our financial advantage will fund] the most aggressive field program that has ever been implemented in a New York City congressional district,” Steve Israel, chairman of Democratic Congressional Campaign Committee, told the Observer.

The DCCC released its second ad against Grimm this week. Like the first, it features grainy black-and-white footage of Grimm synced with voiceover snippets from news broadcasters and US Attorney Loretta Lynch describing the charges against the Congressman.

The second TV spot adds a new twist, juxtaposing footage of Grimm defending himself with enumerations of his indictments. A segment of Lynch saying “conspiracy to defraud the United States” is followed by a sound byte from Grimm: “I know I’m a moral man,” with the pattern repeating three times in the 30-second ad.

The ads ends with a voiceover saying that the DCCC paid for the ad, which was “not authorized by any candidate or candidate’s committee.”

More cash-strapped candidates have had to do the negative campaigning themselves. In his run against Kathy Hochul for lieutenant governor in the Democratic primary, Tim Wu rarely misses an opportunity for a rhetorical assault on his opponent.

He has accused Hochul of hiding from the press, charged that her voting record should “disqualify” him from a Democratic primary, and even held a press conference to release a Hochul “dossier”—a list of her votes in Congress that leaned Republican.

Recchia, who raised $261,693 in June, ten times as much as Grimm during the same period, had a much wider range of options.

His campaign’s first TV spot shows Recchia driving across the Verrazano-Narrows Bridge to drop groceries for his mother on Staten Island, going back to Brooklyn—where he lives—to take his daughter to ballet lessons, then crossing the bridge again to see his mother, all on one Saturday, all earnestly projecting his deep ties to the borough.

For many residents though, the ad hasn’t quelled their perception of Recchia as an outsider to Staten Island, and may have even strengthened it.

“Recchia’s not a Staten Islander just because he visits his mother,” said Paul Ursini, 44, a resident in the New Dorp neighborhood on Staten Island who commutes to St. George for work.

A major obstacle for Recchia is this election may be the cynicism of voters, many of whom are unscathed by the allegations against Grimm because they see politicians as inherently corrupt.

“I don’t think it really bothers me what he did,” Ursini said. “Whether a politician’s guilty or not, it’s useless to me!”

Many residents see Grimm’s personal connection with the borough as more important than his potentially crooked past.

“If he did [what the indictment said], you know what, he’s just a politician,” said Elizabeth Drumm, a waitress at the Unicorn Diner on Victory Boulevard. “I’ve seen him two years in a row, many, many times in both of the restaurants I work with. He genuinely sits down and listens to the people.”

Grimm has retreated to grassroot campaign tactics after being abandoned by the Republican establishment in the wake of his indictments in April, keeping a busy schedule meeting and greeting residents at local fairs, festivals, and various community events, while keeping a low profile in the press, which he accuses of mistreatment, aside from the occasional appearance on Fox News and a pro-Israel rally in Brooklyn.

“There’s no question: I’ve been vilified by the press since the day I got here,” Grimm told Politico in May.

He raised a paltry $23,430 in June, and is seen as a political liability by most. For instance, New York State Sen. Marty Golden was forced to defend himself for deciding to host a fund-raiser for Grimm, dismissing his scandal as a secondary issue.

“The real issues, of course, the liberal forces in the district would rather not discuss,” Golden said in a statement. “Jobs? America’s overall decline? Liberal policies have spelled failure, so their tactic is to change the subject, talk about something else.”

Campaigning on core issues would be an uphill battle for Recchia in the only borough that carried Republican Joe Lhota in the 2013 mayoral election.

Meanwhile, Grimm is banking on his strong stance on conservative touchstones in politics—support for police officers, veterans, and opposition to President Barack Obama—to carry him through.

Grimm’s campaign has also received a major boost this week. His trial, originally slated for October, has been rescheduled for Dec. 1, well after election day.