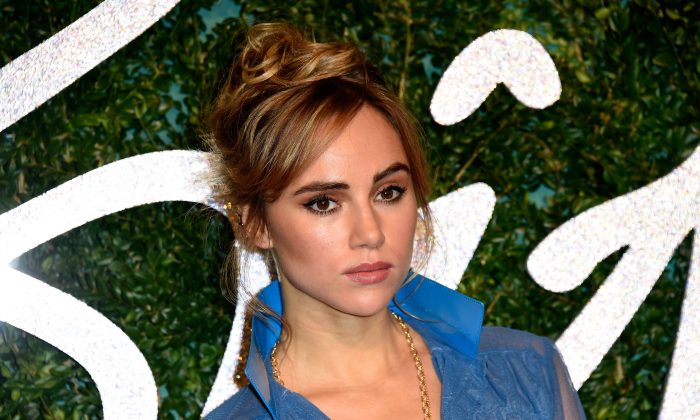 Suki Waterhouse is the current girlfriend of Bradley Cooper, even though there’s a rather large age difference in the relationship.

That gap has raised eyebrows but has not deterred the couple from staying together for almost two years now. Waterhouse dated Last Shadow Puppets singer Miles Kane for about a year until February 2013; about a month later, she started dating Cooper.

Cooper’s previous relationship was with Zoe Saldana for about two years before it ended in January 2013.

Cooper hasn’t appeared to talk about Waterhouse nor she much about him, but they’ve been pictured happily together in a variety of settings.

Waterhouse did, however, describe how she and Cooper first met at the Elle Style Awards in London. “We were dancing at the after-party, and he asked me if I fancied going to a club. We went to Cirque Le Soir in London–and he’s a ridiculously good dancer, yes. But I’m a serious dancer too, so I don’t know if I was fully concentrating on that,” she told Rollacoaster magazine.

“We make a pretty good duo, though.”

She also said that the reason she hasn’t talked much about her and Bradley is because interviewers don’t ask about the relationship. “Yes, I never get asked about it, because they all think I’m not going to answer them,” she said.

Then again, at least two interviewers did ask her.

“I don’t talk about my boyfriend because it’s boring,” Waterhouse said in Elle UK’s January issue. “At least, that’s what I decided to tell you when you asked.”

“Look, maybe it’s best for me to say, ‘I’m not one of those girls who goes on about their boyfriends,'” she added. “I do think whatever I say will sound weird. But the truth is, if I start talking about him, I probably won’t be able to stop. And I don’t really want to talk about him, you know?”

She added to The Sunday Times Style that she was “mental” a couple years ago, but her relationship with Cooper has calmed her down. “You can have some stable things in life, and so long as you’re not away from those things for too long, they can help keep you grounded,” she said.

Neither Cooper nor Waterhouse has addressed the massive age difference, but the model did say she wants to have children in “not too long.”

Cooper also addressed the issue. “I’m sorry my father won’t be around to see his grandchildren, but he knows fatherhood was something I was looking forward to,” he said. “That’s my next big step in life.”

Despite her young age, Waterhouse is already very successful in her field.

Waterhouse, also known as Suki Alice, began modeling at age 16 after being discovered in a London pub. Her first big campaign was as a lingerie model for Marks and Spencer, at age 19, and in the past few years she has expanded her work considerably. She became attached to Burberry, and has also modeled for big brands such as Swatch, H&M, and Pepe Jeans.

She’s also appeared on several magazine covers, including Elle UK, and landed several film roles. She’ll appear in her biggest role yet when the next movie in the Divergent Series, Insurgent, hits theaters in March. She plays a character named Marlene, a member of the Dauntless faction who befriends Tris (Shailene Woodley).