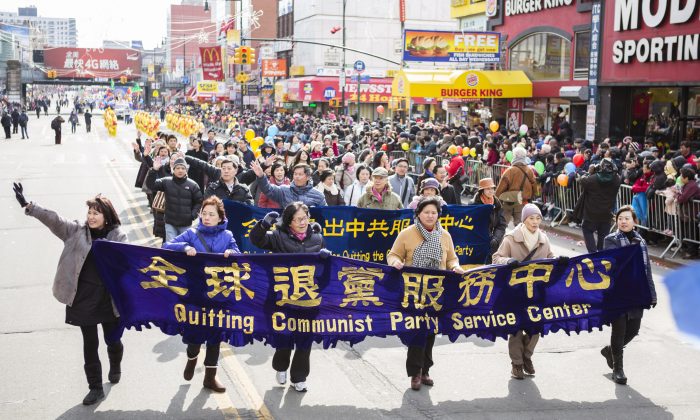 Falun Gong practitioners carry a banner asking people to quite the Chinese Communist Party during a parade in Flushing in 2014. (Dai Bing/Epoch Times)
China

NEW YORK—Residents of Flushing, Queens, said they have endured a six-year-long nightmare on the streets of their community, and they have sued in federal court seeking to stop it. The lawsuit alleges that an ongoing campaign has targeted the 13 plaintiffs with beatings, harassment, and death threats.

At issue in the complaint are the rights of New Yorkers to the constitutionally guaranteed practice of the religion of one’s choice and the enjoyment of peaceful access to streets and other public spaces.

The case targets a Beijing-linked organization called the Chinese Anti-Cult World Alliance and four named individuals and several unnamed defendants who are said to have conspired in a campaign of violence and intimidation beginning in the fall of 2008.

The plaintiffs in the suit are individuals who either practice the spiritual discipline Falun Gong or who are alleged to have been mistaken for Falun Gong practitioners. The complaint alleges that police have not been able to protect residents who are being victimized, and that, unless the court acts, the attacks will only worsen.

The complaint filed on March 3 in the United States District Court of the Eastern District of New York describes in detail close to 40 incidents where the defendants have threatened or attacked the plaintiffs. Many of the cases were previously documented by Epoch Times.

Taken together, the series of incidents give a picture of a community under siege. Walking down the street, handing out a flier describing Falun Gong, manning a table where Falun Gong religious literature is given out, taking a picture—such acts are said to have inspired the defendants to deliver beatings, insults, and death threats.

For instance, on March 6, 2013, the complaint relates how the plaintiffs Li Xiurong and Cao Lijun were walking down Main Street in Flushing when defendant Li Huahong attacked them. The defendant is then said to have requested backup, whereupon a mob of 20 to 30 people surrounded the two Falun Gong practitioners.

Cao was able to run away and seek help, but Li was held by the mob. She heard them yell “Kill her” and “Beat her to death.” The terrifying incident lasted about 30 minutes, only ending when police summoned by Cao arrived.

The death threats made against plaintiff Li are a typical part of the abuse the complaint describes.

For instance, the complaint states that on July 14, 2014, three plaintiffs were walking down Flushing’s Roosevelt Avenue when one of the defendants told them, “You are even worse than dogs. I am going to round you all up and exterminate all of you within three months. I will strangle all of you to death.”

The defendant then continued, “I’ll finish you. I’ll dig out your hearts, livers, and lungs. Someone will kill you.” The complaint reports the three plaintiffs were in fear for their lives after this encounter.

Falun Gong is a spiritual practice with similarities to Buddhism and Daoism. Its believers live according to the principles of truthfulness, compassion, and tolerance, and practice a series of meditative exercises.

The complaint describes the abuse the defendants are said to have meted out to the Falun Gong practitioners as “a well coordinated campaign of violence and intimidation that interfered with their rights to practice their religion.”

“Members of the Falun Gong community in Flushing are being targeted solely as a result of the peaceful practice of their religious beliefs,” said Dr. Marsh, executive director of the Human Rights Law Foundation, which filed the suit on behalf of the plaintiffs. “No one has the right to target a religious minority in the United States of America visiting their place of religious observance or for peacefully and lawfully expressing their religious views.”

The suit charges multiple claims of violations of federal civil rights laws and of New York’s hate crimes statute. According to Marsh, some of the suit’s claims are modeled on litigation used in the past to check hate groups like the Ku Klux Klan.

Apart from the threats to the plaintiffs’ life and limb, and the violation of their right to practice their religion, the complaint details how the campaign has sought to rob the plaintiffs of their dignity.

For instance, the complaint describes how Chinese-language posters displayed prominently in Flushing urge residents and visitors to beat Falun Gong believers as they would a road rat.

The events described in the suit had their origin in China in 1999.

Falun Gong was spreading rapidly in every part of China and among all levels of society. The spiritual discipline was said by state sources to have between 70 million and 100 million practitioners—numbers greater than the membership of the Communist Party at that time.

In April 1999 then-head of the Chinese Communist Party, Jiang Zemin, took notice of Falun Gong in a letter to members of the Politburo, the executive committee that is near the top of the Party’s hierarchy.

He noted how large was the number of people practicing Falun Gong, how they included Communist Party members and members of the security and armed forces, and how their beliefs could be a challenge to the Party’s ideology of materialism and atheism. He concluded that Falun Gong was a threat to the Party.

In July 1999 Jiang ordered a campaign to eradicate the practice, and practitioners in China have since suffered detention, brainwashing, torture, and murder.

There is a Chinese word for the kind of campaign launched against Falun Gong in China.

The website Minghui, which Falun Gong practitioners use as a clearinghouse for firsthand reports of the persecution of Falun Gong in China, has documented over 3,800 deaths due to torture and abuse. Due to the difficulty in getting information out of China, Minghui asserts the actual number of such deaths is believed to be much higher. Independent investigators believe tens of thousands of Falun Gong practitioners have been killed by having their organs taken for use in transplantation operations.

There is a Chinese word for the kind of campaign launched against Falun Gong in China.

On May 17, 2008 the douzheng launched against Falun Gong in China appeared in full force on the streets of Flushing.

A group of Falun Gong practitioners were attending a rally in Flushing, Queens, when an estimated 200 to 300 individuals descended on the rally and began throwing objects and shouting threats and insults at the practitioners.

According to the complaint, “Many members of the crowd rushed at, seized, and beat several Falun Gong believers, including Judy Chen, a U.S. citizen and the mother of two U.S. Marines.” Chen has in the past distributed Epoch Times in Flushing as an independent contractor.

Those attacking didn’t go away. The attacks intensified, and individuals included among the defendants frequently targeted Falun Gong practitioners in the community.

In September 2008, shortly after the attacks that began in May had died down, Michael Chu and Li Huahong, two of the named defendants in the complaint, registered the Chinese Anti-Cult World Alliance (CACWA), for which Li and Chu serve as co-chairs. The complaint targets the activities of the defendants following the registration of CACWA. Reached by phone, Chu said he was letting his lawyer handle the lawsuit. Li could not be reached by press time.

The CACWA operates “as a branch office or affiliate organization” of the Chinese Anti-Cult Association in China, according to the complaint.

According to the complaint, the Chinese Anti-Cult Association was founded in 2000 in China to “purge the world of the Falun Gong religion and its believers through a ‘douzheng’ campaign,” and had “created branch offices and affiliates around the world to suppress Falun Gong outside of China.” The organization has assisted the Chinese regime in its brutal persecution of Falun Gong in China.

According to the complaint, soon after its founding CACWA-affiliated websites made clear its purpose was to douzheng Falun Gong in Flushing.

Rather than subsiding, it appears the attacks in Flushing are only growing worse. According to the complaint, “Since 2014, the violence appears to have increased dramatically.”

The complaint states there were at least three “significant incidents of violence and intimidation directed against the Falun Gong community in Flushing in 2008,” another three in 2009, and four in 2011.

In 2014, the number of “significant incidents of violence and intimidation” against Falun Gong practitioners jumped to 10, and in just the first month of 2015 there were three more incidents.

“Thus, these incidents are beginning to occur about every other week, and there is no reason to believe they will not become even more frequent as the offenders continue to avoid any serious punishment or accountability,” the complaint states.

The police, mainly in Flushing’s 109 Precinct, meanwhile were unable to control the violence and intimidation, and the suit notes “they appear unable to stop, prevent and/or control further incidents.”

“While police have arrived on the scene of some of the incidents described herein, the violence has continued even where arrests were made,” it states, adding that at least one member of the group launching the attacks allegedly told Falun Gong practitioners that the police could not stop them, even if they wanted to.

The plaintiffs are asking the court to issue a permanent injunction against the defendants, to declare that the defendants’ actions are illegal, and to award compensatory and punitive damages.

“Federal civil rights laws and hate crimes statutes exist precisely to prevent these kinds of hate groups from violently intimidating minority communities,” said Marsh. “This case is not only about the rights of a specific religious minority, i.e., Falun Gong, it is about the rights of all religious believers to practice their religion peacefully without violence, death threats, and other forms of intimidation.”