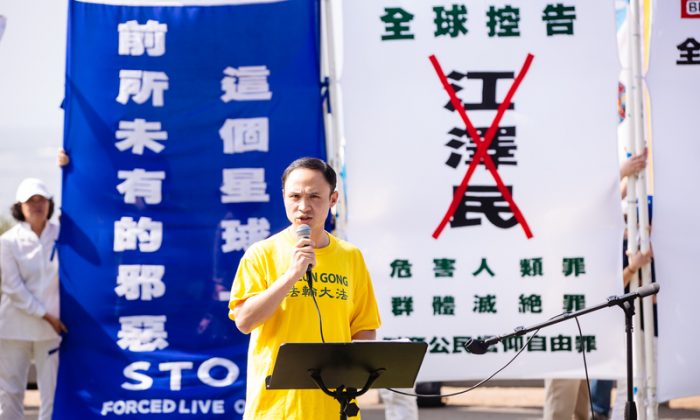 Zhang Peng speaks at a rally in Santa Monica, California, in October 2015. Zhang is a plaintiff in a recent case involving political persecution in New York. (Edward Dye/Epoch Times)
China

NEW YORK—In 2008, Zhang Peng was being held in solitary confinement in a small concrete cell at Wuling Prison in Hunan Province because the faith he practiced had been targeted for elimination by the Chinese Communist Party. His daily food rations consisted of a steamed bun and a bowl of cold cabbage soup, slid through a flap on the door. His bed was two hard, wooden boards atop a concrete block.

For years, the authorities had been attempting to coercively re-educate—commonly known as brainwash—Zhang into believing that his spiritual practice was dangerous. The last thing he expected to be shown was a video taken in the streets of New York.

But again and again he was forced to watch scenes from Flushing, a Chinese enclave in the farthest reaches of Queens, where Chinese living in New York unleash their fury against practitioners of Falun Gong, a meditation practice to which Zhang adheres. Video shows them berating, abusing, and shoving Falun Gong protesters.

“They’re the degenerates of our race,” shouts one woman. “We represent the voice of the people … They represent the scum of humanity,” says a man, loudly, as he pumps his fist in the air. “We came to oppose these Falun Gong mongrels,” adds a young man, using a term that is particularly vitriolic in Chinese. The atmosphere is angry and excited.

This incident, and a string of incidents like it—bilious political spite, often violent, loosed against a group of peaceful religious practitioners—is at the heart of a recent civil lawsuit that Magistrate Vera M. Scanlon in the Eastern District of New York has recommended proceed to trial in a decision on March 28.

The complaint, filed in March 2015, describes these acts as an extension in the United States of the campaign of “douzheng” waged against Falun Gong by communist authorities in China. The complaint translates the Chinese term “douzheng,” which traces back to the Party’s history of violent class struggle during the Cultural Revolution, as “violent suppression.” For what it says is the campaign of hate directed at the plaintiffs’ beliefs, the suit seeks compensatory and punitive damages.

The organization identified as attacking Falun Gong in Flushing is the Chinese Anti-Cult World Alliance (CACWA), a suspected affiliate of the China Anti-Cult Association established as part of a “comprehensive suppression overseas,” according to the magistrate’s summary of the plaintiff’s brief.

The China Anti-Cult Association was one of the organizations set up at the behest of Party leader Jiang Zemin, who initiated the suppression of Falun Gong, in order to defame the practice and incite hatred toward it among the public. Before it was marked for elimination in 1999, Falun Gong, which consists of slow meditative exercises and the adherence to moral principles of truthfulness, compassion, and tolerance, was practiced widely and enjoyed official support. The case deals with the attempt to export this suppression to the United States.

“Plaintiffs were all subjected to assaults, battery, death threats, mob violence, and/or other abuses,” says the complaint, “either directly committed by Defendants” or via conspiracy committed by them.

The complaint documents dozens of incidents in which practitioners of Falun Gong are subject to “douzheng”—violent political struggle—on the streets of Flushing.

A typical incident is that recounted by Hu Yang, a plaintiff, who was “aggressively shoved and kicked” by one of the defendants, Wan Hongjuan, who sought to snatch his cellphone. Days later, Wan yelled: “You are even worse than dogs. I’m going to round you all up and exterminate all of you within three months. I’ll strangle all of you to death,” the complaint says.

Other remarks by Wan include: “I’ll finish you; I’ll dig out your hearts, livers, and lungs,” and, “Don’t take a picture of me. If you continue to do this, I want to tell you how you will die. I won’t kill you, but someone else will.”

Punching, kicking, pinching, shoving, assault with a Bible, attempted theft, destruction of property, flipping over tables of Falun Gong materials, are all alleged in the complaint.

Zhang Peng is a party to the case because in 2014, after he left China and came to Flushing to provide information about the persecution to overseas Chinese, he was chanced upon by Ms. Wan.

In July of that year, when he was in Flushing, she was walking past and said: “Your display board is blocking my path. I’m going to take it away.” It was taped together with a number of other boards showing pictures of persecution from China, against the wall.

“It’s not in your path,” Zhang responded. But by then she had begun ripping it up and stomping on the pieces. Zhang’s attempt to pick up one of the pieces led her to wrench his arm away and hurl the board onto the road, while yelling anti-Falun Gong slogans in his face.

“It’s pitiful that she’s being used to do these acts here,” Zhang said in a telephone interview. He said he was very encouraged that the case has been permitted to move to trial, despite what his attorney Terri Marsh described as delay tactics employed by the defendants.

Michael Chu, one of the main defendants, said, “I won’t comment until the case finishes,” in a brief telephone call. His lawyer, Edward Wong, did not return telephone calls on March 28 or 29.

Sinovision, the pro-Beijing broadcaster based in New York that conducted the interviews with Chinese in Flushing, in which they declared that Falun Gong practitioners are “degenerates of our race,” did not respond to questions for comment.

“I understand your question,” a woman who answered the telephone at Sinovision said, when asked whether the station could explain why its videos were used as part of the forced brainwashing of Zhang Peng when he was in captivity. “I can’t answer your question.”

Zhang said that when he was shown the video in prison, he thought it was a typical depiction of the kind of political hatred that Party propaganda is expert in whipping up. “This case shows that America is a completely different society to that of China under the Communist Party.”

Zhang added: “I think American society should be able to understand the Communist Party and its attempt to infiltrate America through this case. They should be vigilant. Freedom needs to be defended.”