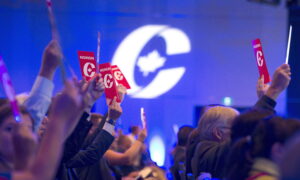 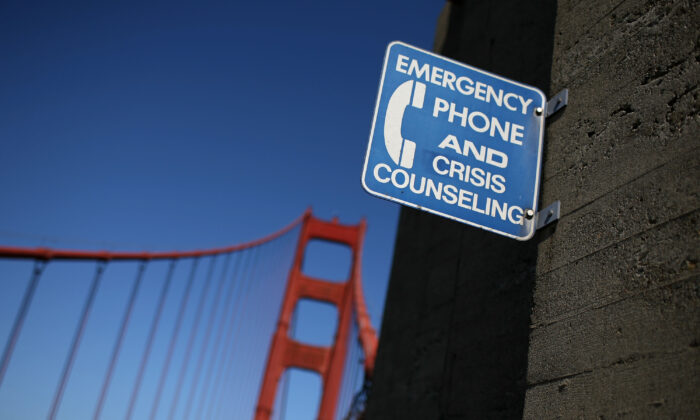 A sign for an emergency phone is seen on the span of the Golden Gate Bridge in San Francisco, Calif., on Oct. 10, 2008. (Justin Sullivan/Getty Images)
US News

New data shows suicide deaths across the United States dropped in 2020, although the full picture remains unclear, say experts, who worry that a sharp rise in fatal drug overdoses and possible cause-of-death misclassification in people who had COVID-19 at the time of their suicide, may be masking the true number.

Preliminary data in a report in the Journal of the American Medical Association (JAMA)—based on figures from the National Center for Health Statistics (NCHS) National Vital Statistics System (NVSS)—shows that there were 2,677 fewer deaths by suicide in 2020 than a year earlier.

The JAMA report is based on preliminary death certificate data from the NCHS/NVSS, with final official mortality data to be published by the Centers for Disease Control and Prevention (CDC) later this year.

Some are sure to see the data as a surprise, given the many predictions that pandemic-related lockdowns would exacerbate mental health conditions and drive suicide rates higher. But subject matter experts say it’s too early to jump to conclusions—and not just for the obvious reason that the data is preliminary and subject to change.

The American Association of Suicidology (AAS), in a statement commenting on the newly released report, called it a “very promising estimate” that it hopes is an indication of a trend in lowered suicide deaths in the United States—and an encouraging sign that suicide prevention efforts are bearing fruit.

The association questioned whether misclassification in cause-of-death reporting left some suicides out of the equation.

“We do not know if some suicides are being masked by COVID deaths in 2020, meaning some of those 2,677+ people who would have died by suicide, instead died by COVID or had COVID at the time of their suicide and were characterized as such by coroners/medical examiners,” the association stated.

Questions have been raised before about the accuracy of deaths-due-to-COVID reporting and, given the fact that the JAMA report shows that most of the 17.7 percent rise in over-the-year deaths in 2020 was attributed to COVID-19, even a small fraction of misclassified deaths could have an effect on the nominal number of suicides. The JAMA report indicated COVID-19 as the cause of death for 345,323 people in the United States last year.

The suicidology association also wondered about another aspect of the JAMA report’s numbers, namely the surge in “unintentional injuries,” which were largely driven by drug overdose deaths. After staying mostly flat around the 170,000 mark for three years, that number jumped 11 percent to 192,176 in 2020.

“Overdose deaths also increased in 2020, and it is often hard to distinguish some overdoses from suicides, again possibly masking the true number,” the AAS wrote.

Yet another factor could be the established historical pattern of suicides falling in times of crisis, only to spike again in subsequent years.

“We should be cautious in celebrating this decrease too early as the data points from 2019 and 2020 do not necessarily indicate a trend,” the association said. “We may see a delayed increase in suicides in 2021 or 2022, similar to what we witnessed following the financial collapse in 2008.”

The association also stated there are “very poor mechanisms” in place in the United States for gauging the number of suicide attempts, and noted that some metrics suggest despair may still be running high.

“So while a lowered rate of suicides is a good signal, it doesn’t necessarily indicate a lowered level of despair in the country,” the association said. “In fact, many recent reports have shown higher levels of mental health issues, including anxiety, depression, and suicide thoughts in certain demographics.”

People struggling with suicidal thoughts or in crisis can call the National Suicide Prevention Lifeline at 800-273-8255 for free and confidential support, or visit the associated website for helpful resources.