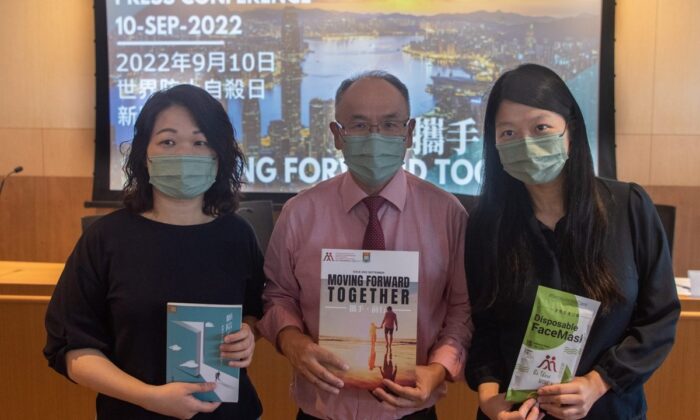 On Sept. 10, the Hong Kong Jockey Club Center for Suicide Research and Prevention (CSRP) at the University of Hong Kong (HKU) announced the suicide rates in Hong Kong. Based on data from the Trial Court of Deaths, the suicide rate in Hong Kong is predicted to be higher in 2022 than it was in 2020, particularly among adolescents.

Suicide in the Elderly

The report also shows that the elderly suicide rate has been high since the handover of Hong Kong from Britain to China in 1997, and the recent number of people migrating or leaving permanently has reached a new high.

“Some seniors feel abandoned as their families move away and leave them in Hong Kong,” Professor Paul Ip Siu-fai said.

As population life expectancy in Hong Kong is better than in many other countries, the number of seniors continues to rise. Elders who live alone face severe anxiety about contracting COVID-19. During the fifth wave of the pandemic in March 2022, the number of elders who ended their lives was exceptionally high.

The estimated overall suicide rate in Hong Kong was 9.0 deaths per 100,000 people in 2021, the same as the international suicide rate of 9 in 2019. This data was adjusted based on the age structure of the global population.

Suicides in Young People Shot to a New High

The overall number of suicides is on a rising trend. The CSRP warns the public that the phenomenon merits attention. Based on the released data, the main suicides in children occur between the ages of 13 and 18. Ms. Leung Pi-yi, an education psychologist, explained, “Under the pandemic circumstances, face-to-face school classes have been heavily affected. Classes have been suspended, shortened, or switched to online learning. Students have no choice but to take their summer holiday earlier.”

Hong Kong students are under particular pressure to perform well in public exams and have found adapting to these sudden but drastic changes in learning to be challenging. Facing academic and social influences, children can experience difficulty expressing their emotions, which may result in suicide.

Trouble Communicating with Families and Focusing on Studies

In addition, nearly 40 percent of suicidal students mentioned quarrels, drama, and pressure from parents or families, that centered around the number of hours spent using electronic devices such as cell phones and computers. In Hong Kong, it is common for parents to put a lot of pressure on their children’s academic studies.

Twenty percent of the those questioned felt strained when talking about their relationship with their mom.

CSRP Director Professor Paul Ip Siu-fai said, “The learning patterns during the ongoing pandemic have changed drastically. Not being at school and [not] having a social life can have consequential impacts on students’ mental health in the long run.”

On Sept. 12, during a program on Radio Television Hong Kong (RTHK), Prof. Ip pointed out, “The main support system of teenagers in Hong Kong stems from schools, families, and their peers. However, the pandemic and lockdowns have made these three supporting aspects more difficult [to access].”

In other words, students often found themselves isolated or unsupported during the lockdowns.

Professor Ip said the center had analyzed the local suicide rate of young students with data from the Hong Kong Police Department. They found that about 25 percent of the suicides mentioned academic pressure and difficult relationships with families in their suicide notes.

What Parents Can do to Prevent Suicide

Professor Ip said children must stay home for a prolonged period during COVID-19 lockdowns. With little socialization or outlets to release pressure, conflicts are usually more common if parents work or have little time for their children.

Ip gave an example of how problems can start. “A student was using the computer online at home. He was doing his homework. His parents mistook him for being lazy, thinking he was playing around with online games instead of studying.”

Families living in tiny spaces are far more likely to have friction.

Without peer support, children feel cornered and have nowhere to relieve their emotions.

The professor suggests, “Most of the schools now are half-day only. Learning might become more stressful for students. Schools should adjust curricula and provide students with more assistance and learning aids.”

Prof. Ip also emphasizes how important it is for parents to spend time listening to their children and understanding their anxieties, feelings, or concerns.

The HKJC Centre for Suicide Research and Prevention points out that suicide prevention has become a global concern in public health. Professor Ip urges the public to join hands and help people in need to move forward.