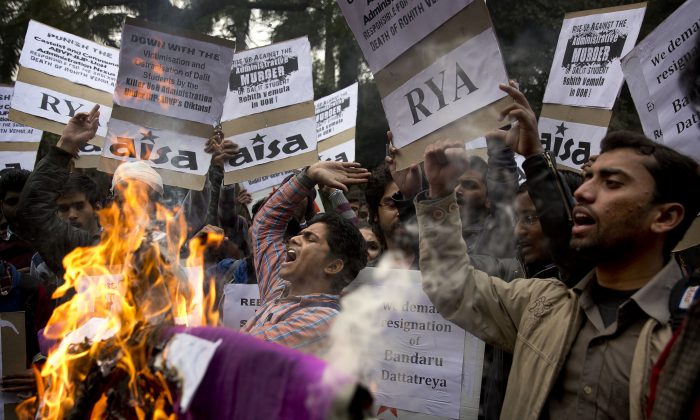 Indian students shout slogans and burn effigies of Hyderabad University's vice chancellor and a federal minister while protesting the death of an Indian student who, along with 4 others, was barred from using some facilities at his university in the southern tech-hub of Hyderabad, in New Delhi, India, (AP Photo/Manish Swarup)
India

HYDERABAD, India—Shouting slogans and holding placards, hundreds of students on Tuesday angrily protested the death of an Indian student who, along with four others, was barred from using some facilities at his university in the southern tech-hub of Hyderabad.

The protesters accused Hyderabad University’s vice chancellor and a federal minister of unfairly demanding punishment for the five lower-caste students after they clashed last year with a group of students supporting the governing Hindu nationalist party.

Police are investigating whether actions by the officials contributed to the 26-year-old doctoral student’s death, which they say was a suicide. He had been a member of a group representing Dalits, the lowest caste in India’s Hindu caste hierarchy.

The demonstrations in Hyderabad drew nationwide attention, with TV channels running updates throughout the morning. The students have boycotted their classes and were holding a sit-in in the university. “We want justice,” they shouted as scores of police stood by.

Rohith Vemula ‘s body was found hanging in a hostel room, weeks after university authorities barred the five students from staying in the students’ hostel or using the library or other facilities. The five had been living in a tent outside the gate of the university since their suspension on Dec. 21.

University officials had cleared the five Dalit students in a preliminary inquiry into the clash, but reversed that decision in December and ordered that they be suspended.

The protesting students say the university’s decision to punish the five was due to pressure from federal minister Bandaru Dattatreya, who sent a letter to the Human Resource Development Ministry demanding action against the Dalits.

Although caste discrimination was outlawed soon after India’s independence from Britain in 1947, it remains an influential force in Indian society. The government has worked to reverse the discrimination by setting quotas for jobs and university spots for different castes.