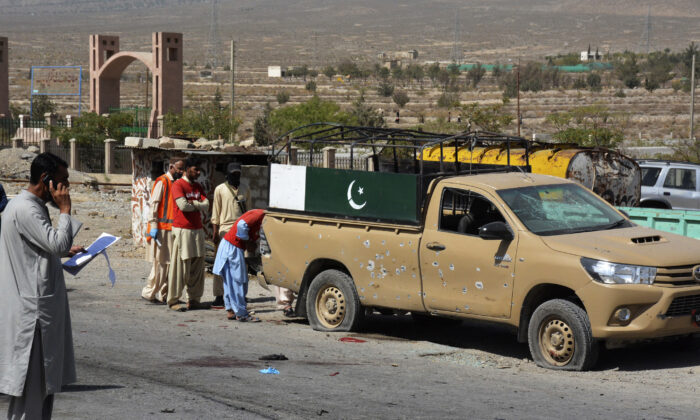 Pakistani security officials examine the site of suicide bombing in a checkpoint on the outskirts of Quetta, Pakistan, on Sept. 5, 2021. (AP Photo/Arshad Butt)
Middle East

Senior police officer Azhar Akram said the attacker had walked toward the checkpoint manned by the paramilitary Frontier Corps on Quetta-Mastung Road, some 25 kilometers (15 miles) south of Quetta, the capital of Baluchistan province. He said body parts were found at a distance from the security post after the bombing.

Akram said some of the wounded were in critical condition and the death toll could rise.

Baluchistan, bordering Iran and Afghanistan, is a key province in southwest Pakistan, where China has been working on projects related to the China-Pakistan Economic Corridor. The projects, including road construction, power plants and agricultural development, have cost billions of dollars.

China has in recent years also played a key role in developing the deep-water port of Gwadar on the Arabian Sea. But there have been attacks on Pakistanis and Chinese working on the economic corridor projects.

A suicide bomber last month detonated his explosives near a vehicle carrying Chinese workers, killing two Pakistani children playing by the roadside and wounding a Chinese national and two other Pakistanis in the port city of Gwadar.

Suspected separatists also last month hurled a hand grenade at a store selling national flags in Quetta, killing one man and wounding four others who were buying flags to celebrate Pakistan’s Independence Day.