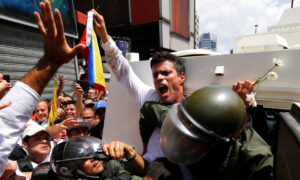 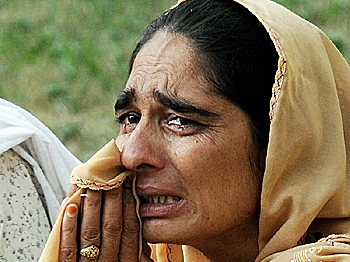 A Pakistani woman weeps for her injured relative after the suicide attack as she awaits for permission to visit him at the Pakistan Ordnance Factory hospital in Wah on Aug. 21. (Farooq Naeem/AFP/Getty Images)
World

Government says killings not connected to recent changes in presidency

A deadly blast near Pakistan’s tribal region bordering Afghanistan on Aug. 21 killed 70 people and injured about 100. The blast was the work of two suicide bombers who blew themselves up simultaneously outside the gate of a munitions factory in Wah Cantt. According to reports, two others did not die and were arrested. The attack took place during a three-day holiday, which officials are crediting with a lower number of dead and injured.

According to reports from the Pakistan Times, one of the four suicide bombers was arrested, and a suicide jacket and grenade was recovered. It was the second attack since the resignation of the president Pervez Musharraf on Monday, according to CNN. Pakistan was thrown into social, political and judicial upheaval last year after Musharraf imposed martial law and sacked sixty members of the judiciary.

The Pakistani government, however is clearly stating that they do not feel there is a connection between Musharraf’s exit and the recent attack.

“We are trying to find out who is actually behind this, it is nothing to do with change in politics,” said Safqat Jalin, a Press Consul at the Pakistan Consulate General in New York.

In fact, the government is saying that the recent major political shift has brought positive changes with it.

“The change [in the presidency] has come about for the first time in Pakistan in a peaceful process,” said Jalin. “The constitution has been followed, the president has resigned of his own accord, it has been absolutely according to the book."

The group Tahrik-e-Taliban is claiming responsibility for the suicide bombings. According to reports from CNN, the self-proclaimed Pakistan branch of the Taliban also promised more attacks if Pakistan’s military offensive against militants in Bajaur Agency continued.

The Pakistani government has said it is doubtful that a truly organized faction was behind the attacks.

U.S. President Bush, who was vacationing at his ranch in Crawford, Texas, called Pakistani Prime Minister Gillani on Friday morning to express his sympathies. In a statement made by Gordon Johndroe, Spokesman for the White House National Security Council during a press briefing in Crawford, Bush also reaffirmed support between the two countries for “going after these extremists that are a threat to both Pakistan, the United States and the entire world."